Geologists divide the North American continent into a series of natural or geographical provinces, bearing names that are rooted in the exploration and settlement of this land. Perhaps no one sensed the distinctions of these provinces better than America’s 19th century pioneers who walked and wagon-trained across the Great Plains towards the Rocky Mountains, and then descended into what they often called the “hellish” Basin and Range, before cresting the Sierra Nevada and the promised land of California’s Central Valley. These regions are but a few of the more than two dozen geographic provinces found in the continental United States. Other well known provinces include the Atlantic Coastal Plain, the Appalachian Mountains, and the Cascade Mountains. The Colorado Plateau province, number 21 on the map, is the focus of the mission of the Museum of Northern Arizona. What defines the Colorado Plateau, or any other province for that matter, is its geology. 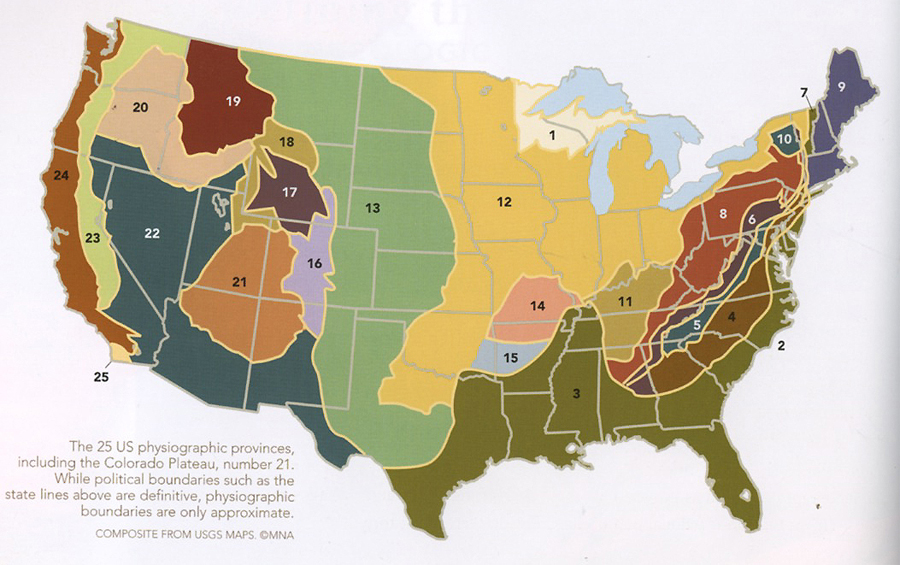 The Colorado Plateau is a land of colorful, sedimentary strata that have been uplifted and dissected into deep canyons by a few large rivers and their tributaries, with extensive between-canyon landscapes in a mostly arid climate. This truly defines the Plateau—colorful, horizontal strata, that are in many places deeply dissected by numerous canyons and made visible by the lack of significant rainfall and vegetation.

Geology and geologic history go hand in hand then to define the Colorado Plateau and this ancient history in no small part determines its present day character. Its history involves the deposition of numerous rock layers or strata laid out in successive waves of environmental change through immense spans of time. These layers record what happened, when it happened and how it all used to look. Geologists use these rock strata to interpret environments that existed here long ago, landscapes as varied as tropical blue seas, meandering rivers, and shifting sand dunes. This is the constructional part of the Colorado Plateau’s history. It involves the time when a multitude of colorful rock layers were laid down, one on top of the other, yielding to us a sequential view of former landscapes. The bulk of the Plateau’s known history is contained in this part of the story, spanning approximately 450 million years, when more than 15,000 feet of sediment was deposited and preserved, much of it still intact upon the landscape. No less important, however, is the destructional part of the story when the strata were subjected to uplift and erosion. This uplift transpired in a way that preserved a great deal of the original horizontal orientation of the strata.

How Old is the Colorado Plateau?

There is no simple answer because while the rocks exposed here may be hundreds of millions or even thousands of millions of years old, the Plateau as a distinct landscape feature is much younger. The age of the Colorado Plateau as a discrete geographic province is estimated to be can be bracketed between 70 and 17 million years.

Experience the natural features of the Colorado Plateau now in a Visual Tour.

The Colorado Plateau has been continuously inhabited by native people of the Americas for approximately 12,000 years. The early people of the Plateau gathered wild plants and hunted game animals. Many took up farming maize, beans, and squash several thousand years ago.

Today, the native peoples of the Colorado Plateau include the Hopi, Navajo, Zuni, Hualapai, Havasupai, Ute, Apache, and Southern Paiute. Each tribe has a distinct history, culture, and language.

The Museum of Northern Arizona invites you to explore the history of these native cultures and their lives today: