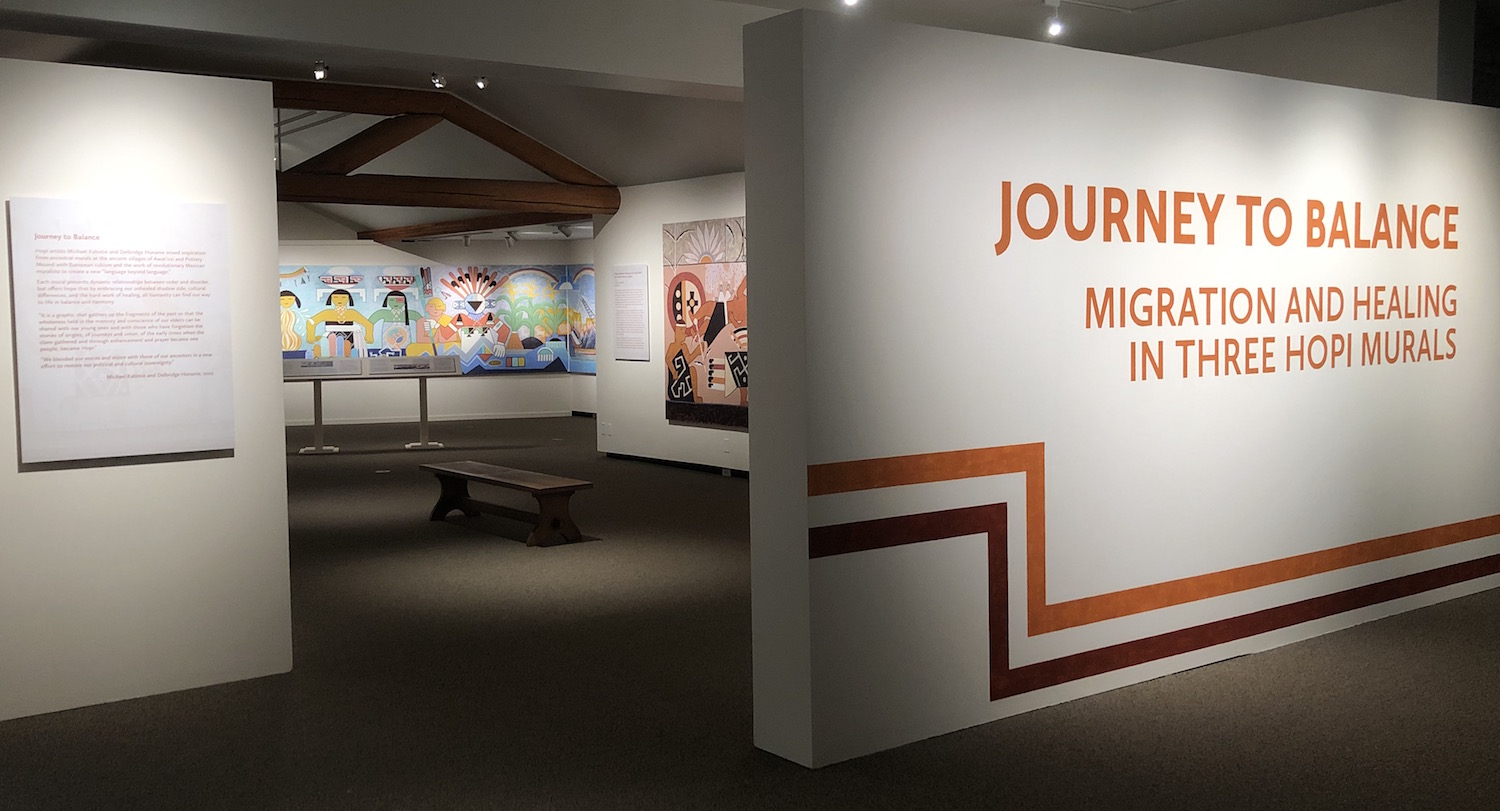 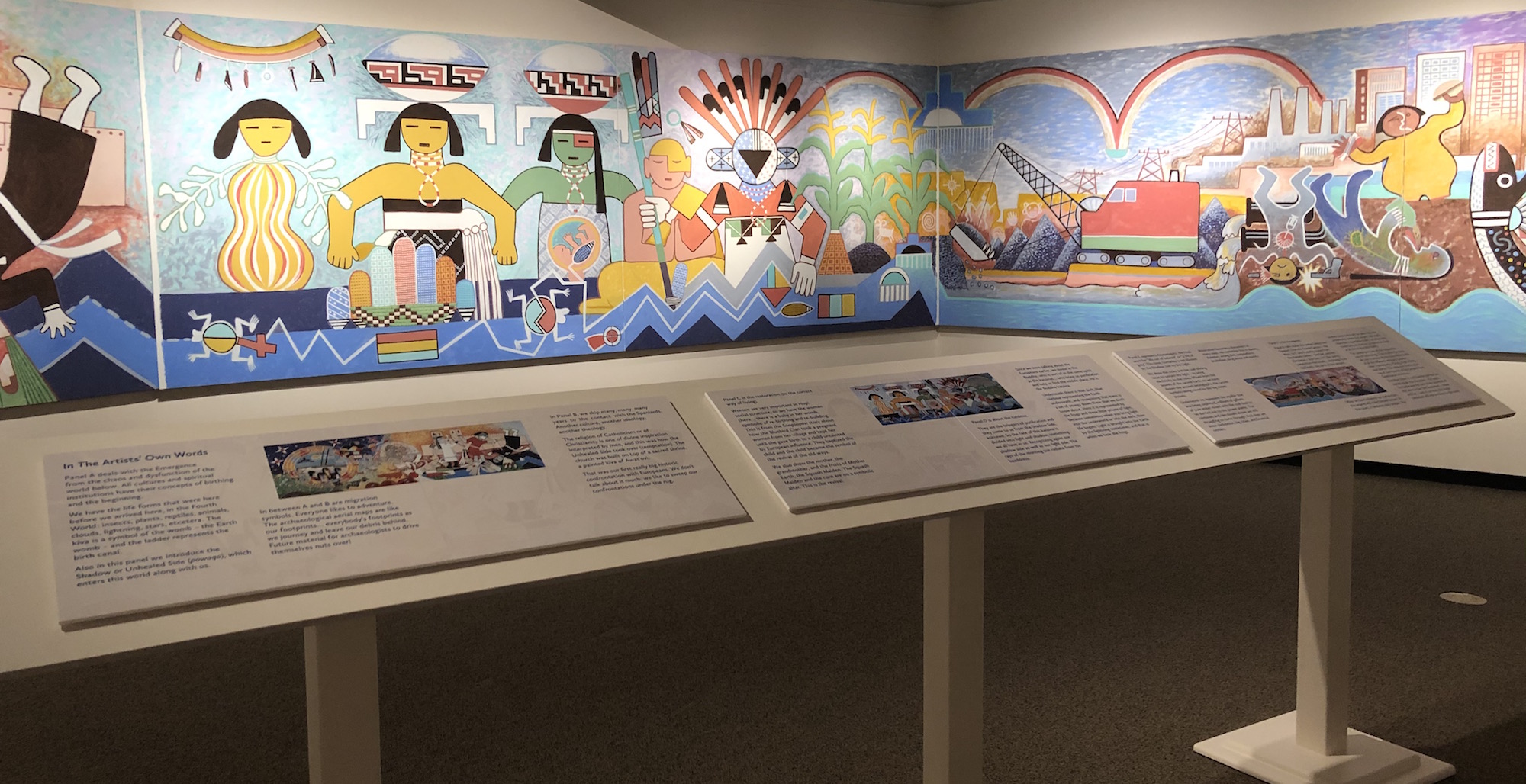 Journey of the Human Spirit, by Hopi artists Michael Kabotie and Delbridge Honanie. 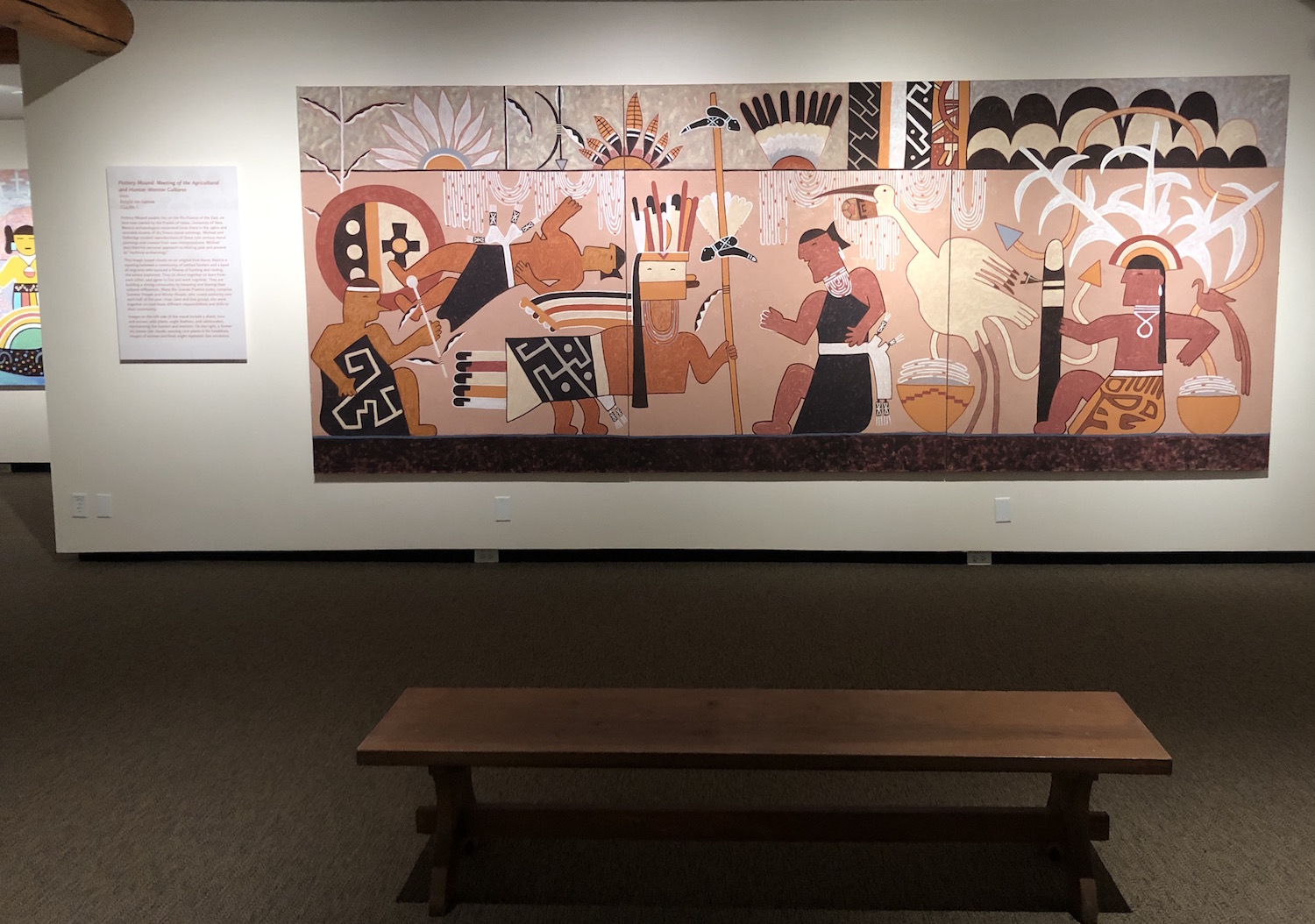 Pottery Mound: Meeting of the Agricultural and Hunter-Warrior Cultures, by Michael Kabotie and Delbridge Honanie, 2001 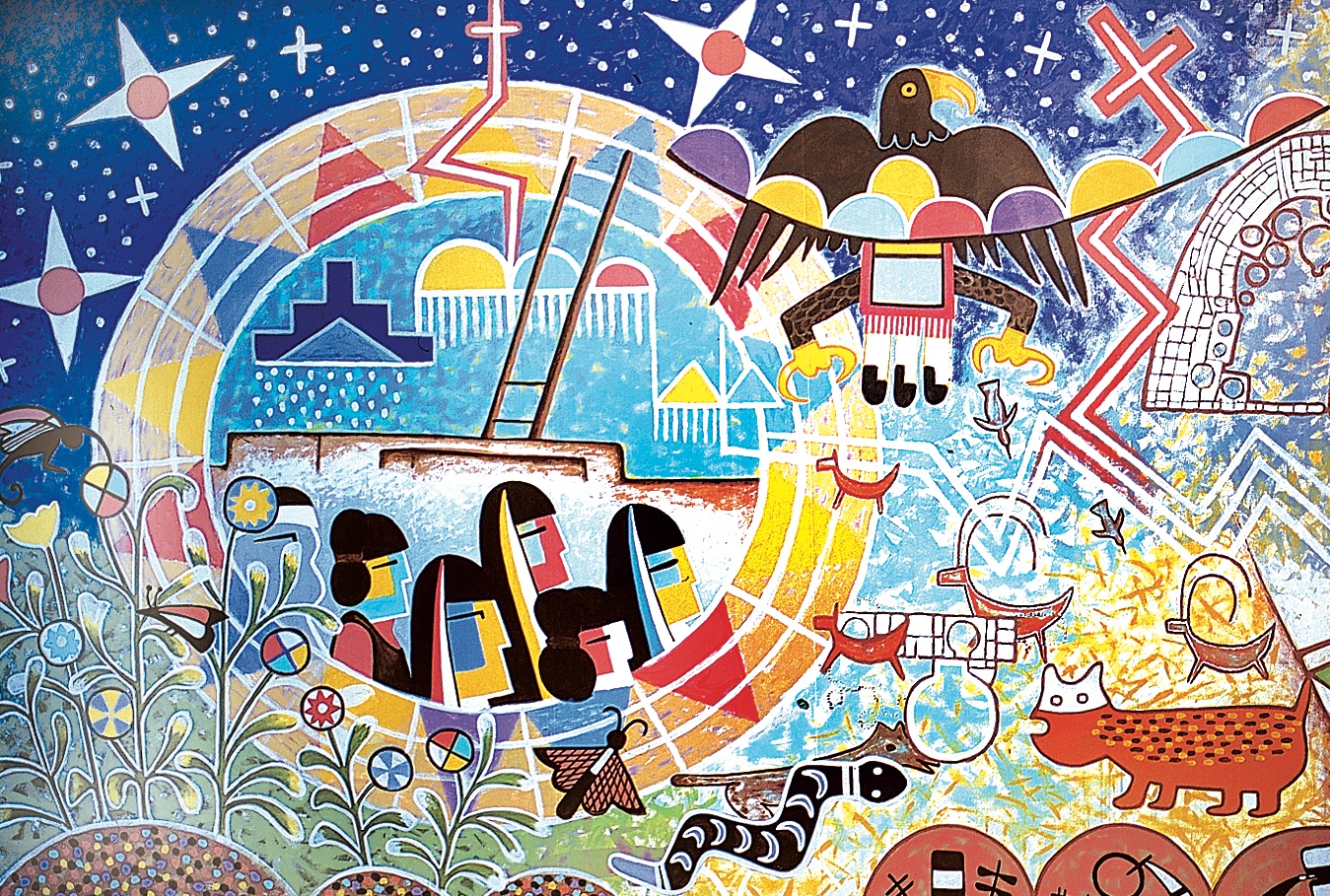 The first panel from Journey of the Human Spirit depicts the emergence into this world; by Michael Kabotie and Delbridge Honanie 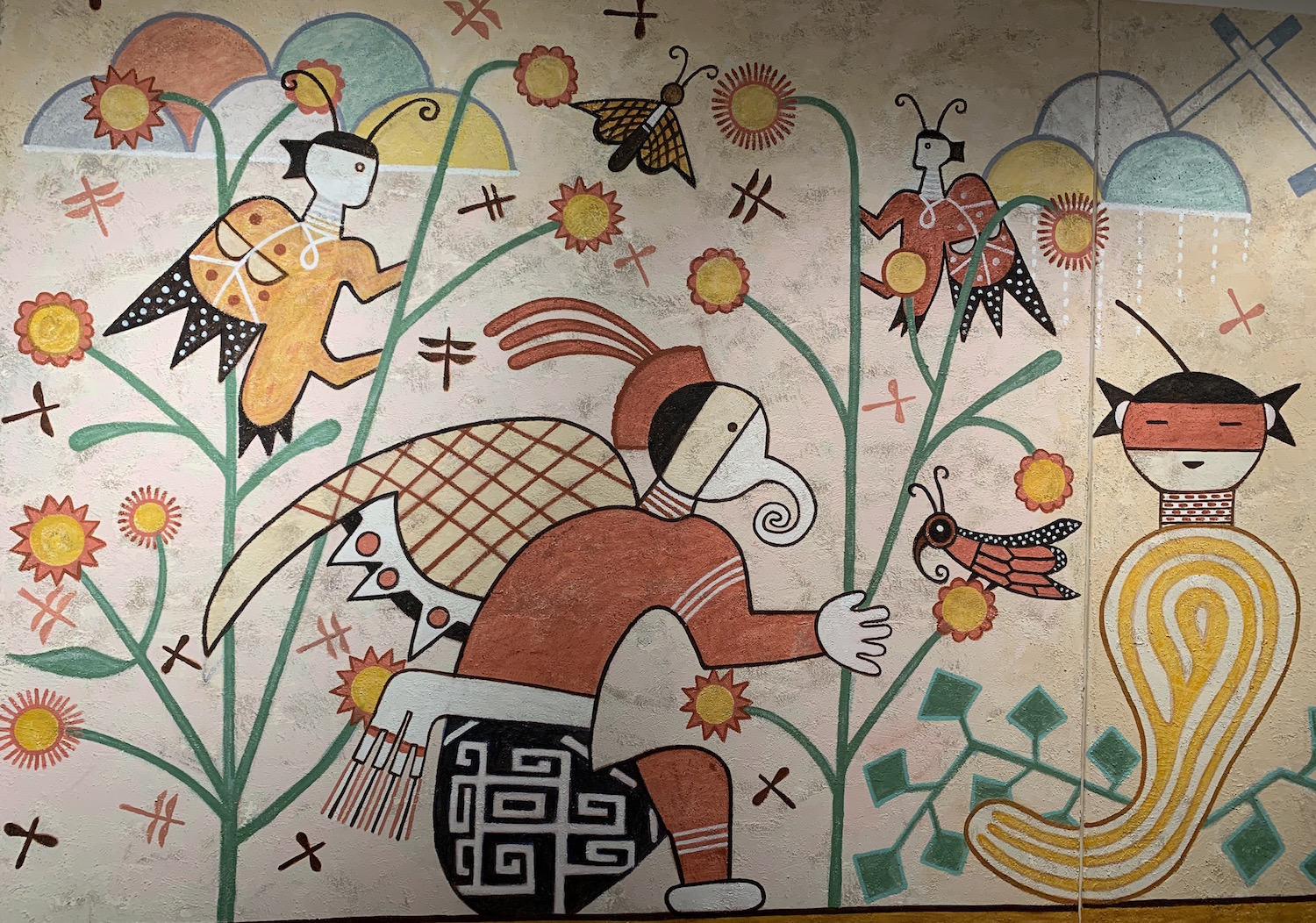 A detail from Germination, by Hopi artists Michael Kabotie and Delbridge Honanie

Large-scale paintings tell a story of the human journey through cycles of chaos and discord to places of wholeness and balance. Hopi artists Michael Kabotie (Lomawywesa, village of Songoopavi) and Delbridge Honanie (Coochsiwukioma, village of Songoopavi) mixed inspiration from ancestral murals at Awat’ovi, European cubism, and Mexican revolutionary muralists to create a new “language beyond language that we would paint so that all the world could see.” Created more than a decade ago, these paintings offer a graphic retelling of Hopi stories and compelling messages for our times. Each of the three murals presents a dynamic relationship between order and chaos, but ultimately offers hope that by embracing our shadow side, our cultural differences, and the hard work of healing, we can find our way to life in balance and harmony.

“It is a graphic that gathers up the fragments of the past so that the wholeness held in the memory and conscience of our elders can be shared with our young ones and with those who have forgotten the stories of origins, of journeys and union, of the early times when the clans gathered and through enhancement and prayer became one people, became Hopi,”the artists explained. “We blended our voices and vision with those of our ancestors in a new effort to restore our political and cultural sovereignty.”

A brilliant mural painting tradition flourished at the height of the Puebloan civilization in the American Southwest between the fourteenth and seventeenth centuries.

Journey of the Human Spirit

Journey of the Human Spirit is a five by forty-eight foot painting recreating ancient stories of emergence and traditional life. Completed by Michael Kabotie and Delbridge Honanie in 2001, the painting takes a new look at historical accounts and looks for commonalities with other cultures through the use of symbols—all from the Hopi point of view.

Narratively, it moves from the mythic emergence of the Hopi people from the earth womb, through the ancient migrations, the coming of the Spanish, the coming of the Anglos, the strip mining of Black Mesa, the abuse of fast foods, drugs, and drink by Native people, and finally, the rebirth of Hopi beliefs and traditions through the technology of the information age.

The Emergence: The emergence of humanity is the starting point of Hopi mythology, and the Kiva is the point where people first emerge from darkness to light. The circle motif represents what the Hopi call the sipapu: the womb or the place of emergence. When we emerged from underworld, the shadow side emerged with us. The figures in gray represent the unhealed side of humanity which must be purified in order to find the middle place.

“When we made the emergence into this world, there was life already here.  We were not the first ones to come to this world.  The plants were already here, the insects, the butterflies (povoolngyum, as we call them in Hopi), the snakes, the reptiles, the animals, the birds, the eagles — were here.  The clouds were here; the lightnings were here; the stars were here. All of these are life forms for us” – Michael Kabotie.

The Pueblo Rebellion: The early Spanish church of San Bernardo, built on top of the sacred Kiva at Awatovi, serves as the backdrop to the Pueblo Rebellion of 1680. People of the pueblos, from as far west as modern-day Taos, New Mexico, to the eastern most Pueblos of the Hopi, rose up in arms against forced conversions and forced labor imposed by the Spanish. Again, gray faces represent the shadow side in this violent conflict.

A Middle Place: The central mural represents the rebirth of Hopi consciousness. Depicted in close proximity are images of three women, the Katsina and Buddha. All of who, in the mind of the artist, are seeking a common ground or pursuing a middle place of harmony. This is the essence of the emergence myth.

The Rational Side: Modern technology, industry and the desire for wealth have, at times, adversely impacted traditional Hopi ways. The results are scaring of sacred lands, and the emergence of an array of social, economic, political and health related challenges, which have taken a serious toll on the people of the Pueblos.

Hope: The final segment of the mural represents the re-education of the brother and sister twins of Hopi Mythology. Below is the serpent symbolizing knowledge, while above, the computer motif and www. symbol signifies communication and adaptation in rapidly changing world. Central in this image is the apple representing both technology and a common mythology of knowledge and power. 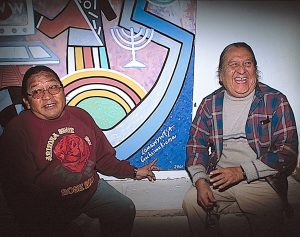 Videos of this exhibition

Activities related to this exhibition