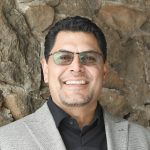 John Haro serves as the Northeast Division Director in the Transmission & Distribution organization at Arizona Public Service. John leads the team responsible for providing safe, reliable energy in APS’ Northeast Division. His specific responsibilities include the operation, maintenance, emergent response, design and construction of the distribution system serving parts of Coconino, Navajo, Yavapai and Gila counties. During his 33-plus year career, John has earned the opportunity to hold various frontline and leadership positions throughout APS and at the Palo Verde Generating Station. After beginning his career in the mailroom, John completed an APS Journeyman Lineman apprenticeship and worked for 16 years in the line trade before being promoted into leadership. John led the Operations and Maintenance team in Surprise between 2010 and 2012; in 2012, he was chosen to lead the Energy Control Center where he directed and led the grid operations team for APS’ service territory and oversaw the interconnected EHV (extra high voltage) grid within the southwest region. In 2014, he was promoted to Senior Manager of Transmission Maintenance for the APS region and was responsible for leading seven departments consisting of 177 employees. In October of 2016, John was awarded the Northeast Division Director position headquartered in Flagstaff. John and Laurie Haro have four beautiful children and one granddaughter. John enjoys leadership/personal development, arts, woodworking, sports, the outdoors and spending time with family. John is also a proud Marine, having served four years in the USMC Reserves.