Message of hope woven into blanket 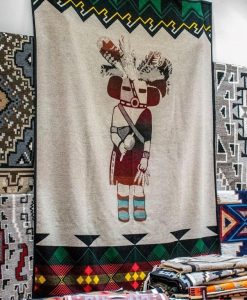 April 2019
[Flagstaff] More than just a bit of woolen warmth on a winter’s night, the Pendleton blanket created to commemorate the Museum of Northern
Arizona’s 90th year is woven with meaning and connections.

The blanket’s colors, designs and central image all carry a message of resiliency and rejuvenation, one familiar to the Hopi people because it is
part of a story told about the eruption of Sunset Crater, and how they transformed difficulty into possibility.

Sunset Crater also has particular meaning for the Museum of Northern Arizona. MNA founder Harold Colton led the successful campaign to
protect Sunset Crater and then did significant research in the area.

MNA board member Sharon Angelo took on the task of designing the limited-edition blanket, pulling from her years of quilting experience and
vast fabric stash.

“I started playing with fabric that I have here in my stash and came up with those colors,” said Angelo, who is an award-winning quilter. She also
thought the blanket should feature a katsina doll, something that has never been represented on a Pendleton blanket before.

“I thought that would make a striking blanket,” said Angelo, who lives in Sedona.

For cultural guidance, MNA collaborated with Stewart Koyiyumptewa, who is the director of the Hopi Cultural Preservation office, and Clark Tenakhongva, who is vice chairman of the
Hopi Tribal Council.

“I’m glad the museum gave us the opportunity to give our input,” said Koyiyumptewa. “The museum is doing a good job in representing the people.”

Koyiyumptewa and Tenakhongva suggested using the Sunset Crater katsina, Kana’a, because it is specifically representative of the area. Kana’a is the katsina who came to the Hopi after the Sunset Crater volcano erupted, layering the earth with lava and volcanic dust for miles around. He taught the Hopi to use the lava rock and volcanic dust to help their crops of corn, beans and squash.

“He was really instrument in teaching the people who were here that you could plant in the landscape after it was destroyed by the volcano,” said Koyiyumptewa. 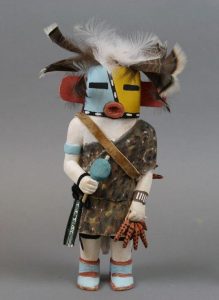 Kana’a comes to the mixed dances at Hopi in the winter, as the days are lengthening, and continues to share the message that any negative situation can be transformed into a positive,
The katsina image on the blanket is based on one in the museum collection, which was carved by Jimmy Kewanwytewa, a Hopi artist who worked for the museum starting in 1934. Jimmy K, as he was commonly known, was an early member of the museum staff who was also a Hopi artist and the first to begin signing his katsinas.

“What better being to represent 90 years of co-working relationship than this particular katsina,” said Koyiyumptewa. “This is a doll that has been made by one of the Hopi elders and it is a true reflection.”

The Sunset Crater kachina doll Kewanwytewa carved is resplendent with color, but Koyiyumptewa and Tenakhongva agreed it would be better to leave most of the colors off the katsina, with the exception of the blue shoes.

“We were set on the shoes, because it’s close to what the Hopi blue shoes look like,” said Koyiyumptewa. Those blue-green shoes represent “the rejuvenation of the earth after being put through a destructive phase.

Green patterns below the kachina represent the growing plants, and the red and yellow designs are flowers, representing all the positive
attributes of a landscape in its natural state.

“Who knows, maybe we’ll have to rely on his instruction again in the future,” said Koyiyumptewa.

Blanket designer and MNA trustee Sharon Angelo is available for interviews. Interviews may be arranged by emailing khutchison@musnaz.org

About the Museum of Northern Arizona: More than 4 million people have visited the Museum of Northern Arizona since its founding in 1928. The mission of the Museum of Northern Arizona is to inspire a sense of love and responsibility for the beauty and diversity of the Colorado Plateau through collecting, studying, interpreting, and preserving the region’s natural and cultural heritage. MNA works in collaboration with native peoples of the Southwest to protect and foster the cultures, traditions, and beliefs of the Colorado Plateau by encouraging artistic expression and supporting, empowering, and educating visitors about the region’s art and cultures. The Museum, located at 3101 N. Ft. Valley Rd. in Flagstaff, is accredited by the American Alliance of Museums.