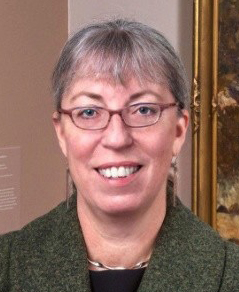 (Flagstaff) -After an extensive nationwide search for a new executive director, the Museum of Northern Arizona trustees are pleased to announce that Mary Kershaw will be filling that office starting in early June. Museum members and the public are invited to welcome her at the Thirsty Thursday on June 6, from 5 to 8 pm.

“We have found the diamond in a sea of pearls,” said MNA Board Chair Bob Gunnarson, who led the search. “I had the pleasure of touring Mary and Peter around the MNA campus when they visited Flagstaff in March and, like all who have met her since, found her to be a charismatic and engaging individual. She listens carefully, evaluates completely what she has heard, and responds with well thought out comments and questions. It is easy to be taken by her intelligence, professionalism and calm demeanor. Mary has an amazing technical breadth of expertise, the ability to quickly understand complex issues and communicate about them in sound and meaningful ways. Many who have worked with her say she relates well to everyone, puts her staff quickly at ease, and finds the often-untapped potential in many situations. She has an amazing depth of experience in the museum world, much of it suited to the Museum of Northern Arizona. Her exposure to, and working experience with, tribal communities of the Southwest enhances her suitability for the work at MNA. ”

A seasoned museum professional, Kershaw comes to MNA from the New Mexico Museum of Art in Santa Fe, where she has been Director for 9 years. During her tenure, the museum celebrated its Centennial with a party for over 7,600 visitors, a year-long program of events and the development of a new contemporary art venue. In partnership with the museum’s Foundation, Kershaw launched a $12.5 million capital campaign for the new venue, which is on track to meet its goal.

Kershaw comes to MNA at a time when the museum is also counting down toward its 100th year.

Kershaw’s museum career has often put at the helm of diverse institutions. Her museum career began in Britain, where she started out as a field archaeologist excavating sites for the Museum of London Archaeology Service. She moved into curating collections and developing exhibitions for the Harrogate Borough Council. Among her projects was overseeing repair work to a 12th century castle and an 11th century hermit’s cave. She discovered a passion for museums and their role.

“Museums are such special places. Our collections, our exhibitions, our buildings – all have the power to inspire new ways of thinking, stimulate creativity, and for our visitors to see the world, and themselves, anew,” said Kershaw “Authenticity is at the very core of all we do – our collections are ‘the real thing’. This is what gives me joy in coming to work every day.”

By 1992, Kershaw had moved into the top leadership position as Head of Museums and Arts for the Harrogate Borough. She was responsible for four independent museums in a 500 square mile district, with diverse collections including archaeology, fine arts, social history, and textiles.

In 2003 she became part of the senior management team for York Museums Trust, responsible for 4 museums, a historic observatory, a medieval abbey, 5 collection facilities and 2.5 million objects.  Her colleagues from that time still speak highly of her leadership:

“There is nothing typical about Mary. She has a laser stream of attention and focus. Her ability to listen and digest what is happening around her is amazing,” said one of her references from the York Museum Trust. “She is a very calm thinker, well planned, doesn’t shoot from the hip, speaks in a very straightforward manner easy to communicate with. I believe her listening skills led to her ability to understanding what everyone was inputting to her. That is what built the cohesive team. In a nutshell, she knows how to set up, exhibit, and run a museum.”

Kershaw had been born and raised in Philadelphia, coincidentally the same city where MNA founders Harold and Mary-Russell Ferrell Colton had lived. And like the Colton’s, Mary Kershaw found herself drawn to the Southwest. In 2010 the opportunity to lead the New Mexico Museum of Art tempted Kershaw and her husband, Peter Kershaw, to move from England.

“The art of the Southwest is a hidden gem in the artworld. Leading national and international figures came here and both transformed the area and were transformed by it,” said Kershaw. “It is a story that deserves to be more widely known and I am delighted to be staying in the Southwest. It is a place that encourages creativity, has long and deep cultural roots and is also open to new and contemporary ideas.

Peter Kershaw is a film director and screenwriter with more than 20 years experience in television production in the UK. In Santa Fe he has been teaching cinematic arts and technology at the Institute of American Indian Arts and also completed an MFA in screenwriting while in Santa Fe. With the move to Flagstaff, he is looking forward to focusing on his writing

“Flagstaff has the youth and vibrancy of a college town and it feels just tucked away enough to really provide both the quiet a writer needs, and the creative community,” said Mary Kershaw.

When she takes the reins in June, Kershaw will become the 11th director of the Museum of Northern Arizona, replacing Carrie Heinonen, who was director from 2014 through the end of 2018. The search for a new director began in January with an executive recruiter who reached out to more than 300 qualified potential candidates. Of those, 137 responded and 37 continued on to an interview process. The top nine candidates were referred to the MNA Executive Director Search Committee, made up of a mix of museum trustees, staff, and community members. After reviewing the resumes, the Search Committee interviewed six of the candidates in depth. Three candidates made the final cut, with Kershaw as the favorite.

“She was clearly head and shoulders above the rest,” said MNA Board Chair Bob Gunnarson. “She was so highly qualified and stood so far above the other two runners up that we elected to engage in negotiations with her.”

In March Kershaw visited the museum, toured the collections and Flagstaff, and went through additional interviews with MNA staff.

“Mary comes across as a very kind and pleasant person,” said MNA Development
Director Liz McGinlay, who was one of the staff involved in the selection process. “She has an even keeled approach to challenges. I am impressed with her knowledge and communication style and look forward to how she develops each staff member and MNA as a whole.

A photo of Mary Kershaw is included with this press release.

About the Museum of Northern Arizona
The Museum of Northern Arizona inspires a sense of love and responsibility for the beauty and diversity of the Colorado Plateau. Founded in 1928, the 200-acre campus includes an historic exhibit building with nine galleries showcasing the geology, anthropology and art of the region; research and collections facilities; a world-class museum shop; and more than 450 public programs annually. To learn more, visit musnaz.org or call (928) 774-5213.