Plesiosaur: Terror of the Cretaceous Sea 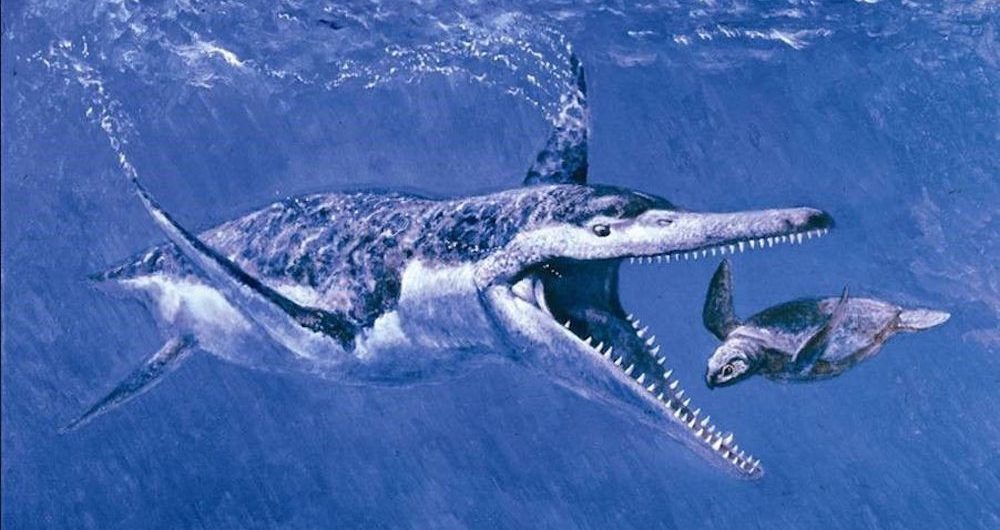 A plesiosaur prepares to eat a sea turtle in this painting by Dan Varner.

With a four-foot-long jaw and 100 shark-like teeth made for attacking and devouring sea turtles and other marine life, plesiosaurs roamed a great inland sea that covered nearly all of central North America 93 million years ago. Plesiosaurs were predatory reptiles of the Cretaceous Western Interior Seaway. These ambush predators had torpedo-shaped bodies streamlined for speed and power, propelled by paddle-like  limbs. With large heads and jaws, short necks, and compact bodies built for overpowering prey, these were terrors of the Cretaceous Sea. 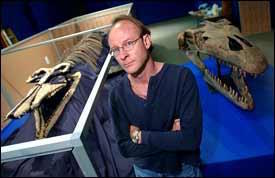 Dr. L. Barry Albright, III, in front of the skeleton of a plesiosaur, left, and the skull of a monosaur during the exhibition in 2003.

MNA excavations in the Tropic Shale in southeastern Utah near Big Water have established five species of short-necked plesiosaurs along what was once the southwestern shores of the ancient Seaway. The shoreline of the ancient Seaway appears to have been near present-day St. George and Cedar City, Utah. Three of the plesiosaurs MNA researchers unearthed are new to science.

In 2003 the museum held an exhibition of some of the plesiosaur finds, as well as other creatures from the Cretaceous Sea. The exhibition included fossilized remains of the 20-foot-long predatory marine reptile and several paintings by the artist Dan Varner depicting what the plesiosaur may have looked like.

This robotic sculpture by artists Brian and Eric Gold demonstrates the swimming motion of a long-neck plesiosaur.

Short-neck plesiosaurs are thought to have been ambush predators with torpedo-shaped bodies streamlined for speed and power, with paddles for limbs and strong, piercing teeth. Long-neck plesiosaurs, on the other hand, were not as fast or as powerful as their short-neck relatives. In the animation here, a long-neck plesiosaur’s swimming habits are demonstrated by a robotic sculpture created by artists Brian and Eric Gold.