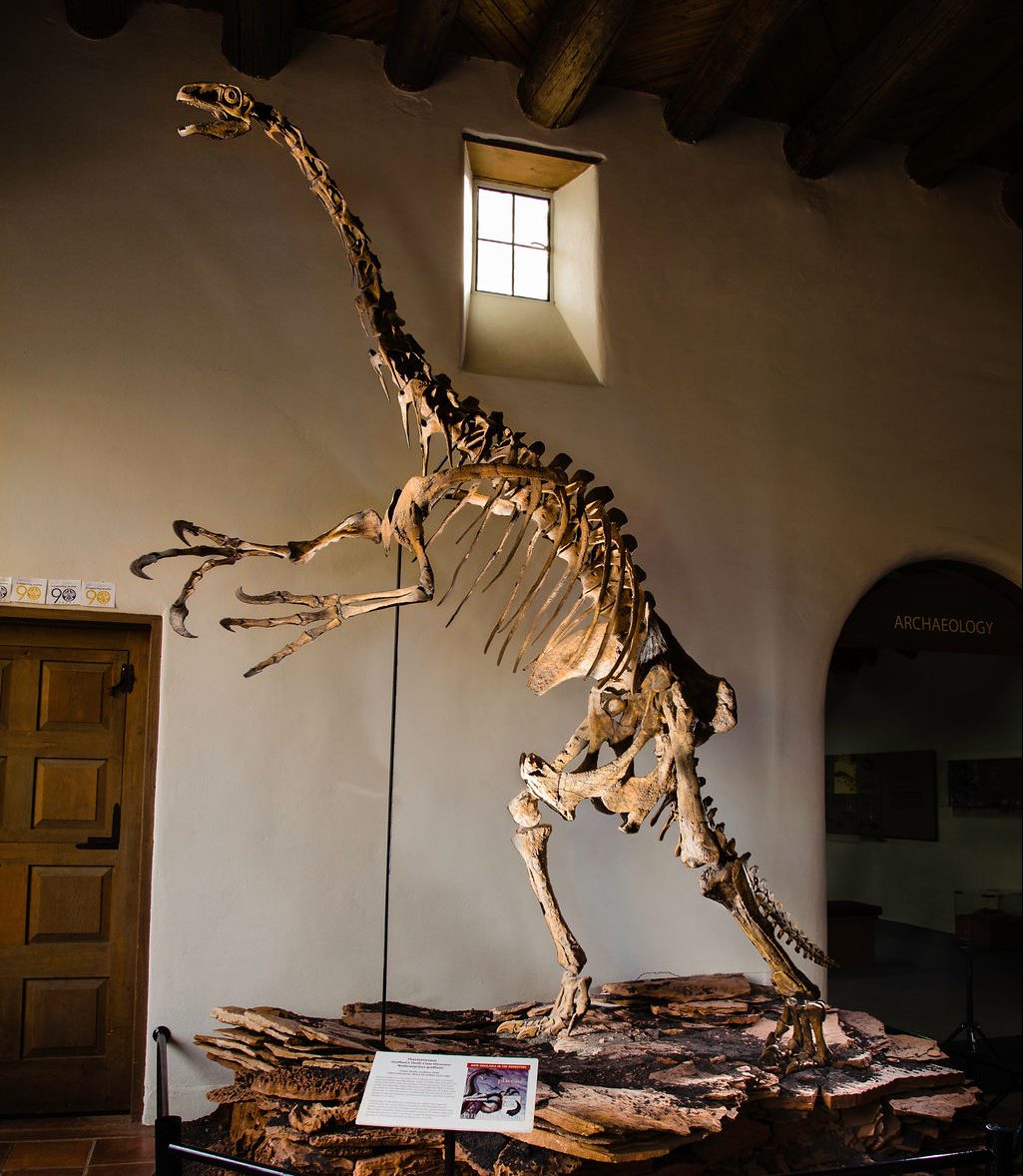 In 2000 the discovery of a single toe bone led to the most complete skeleton of its kind. 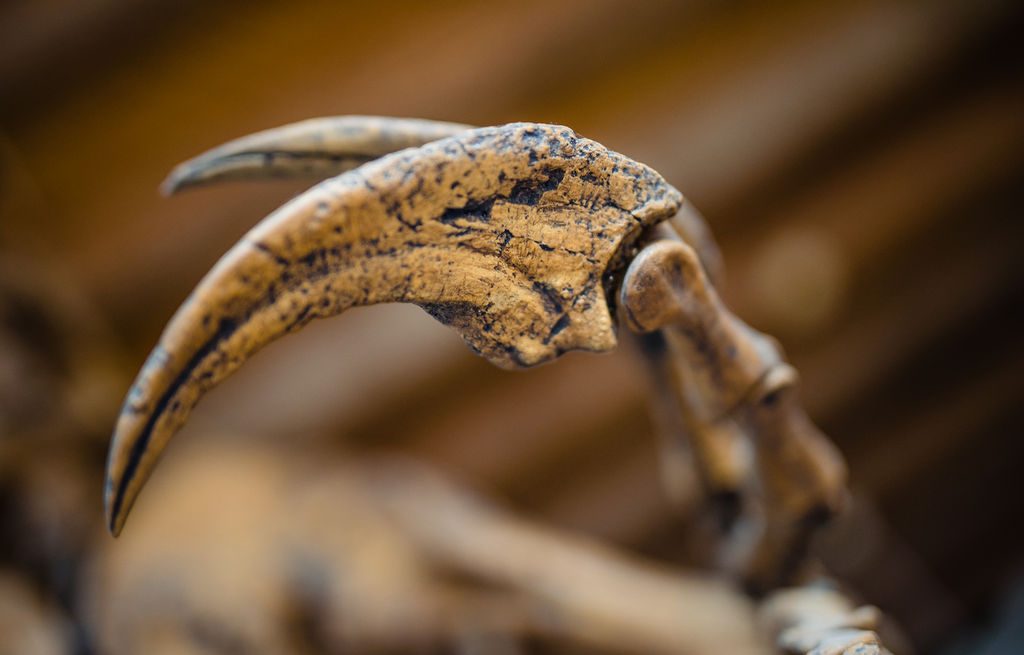 The long, curved claws are reminiscent of sickles, which are tools used to cut hay. 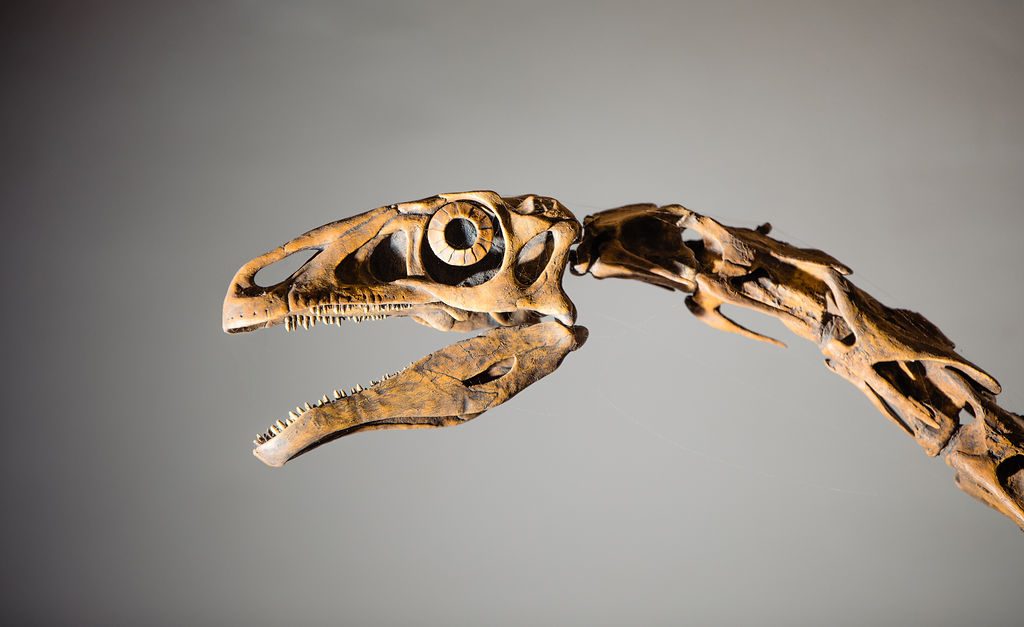 The skeleton was complete except for the head. Luckily MNA was able to get a cast from a therizinosaur found in Asia, which happened to have an intact skull.

The dinosaur remains on display in the museum lobby, where it is a favorite among children and other dinosaur fans. 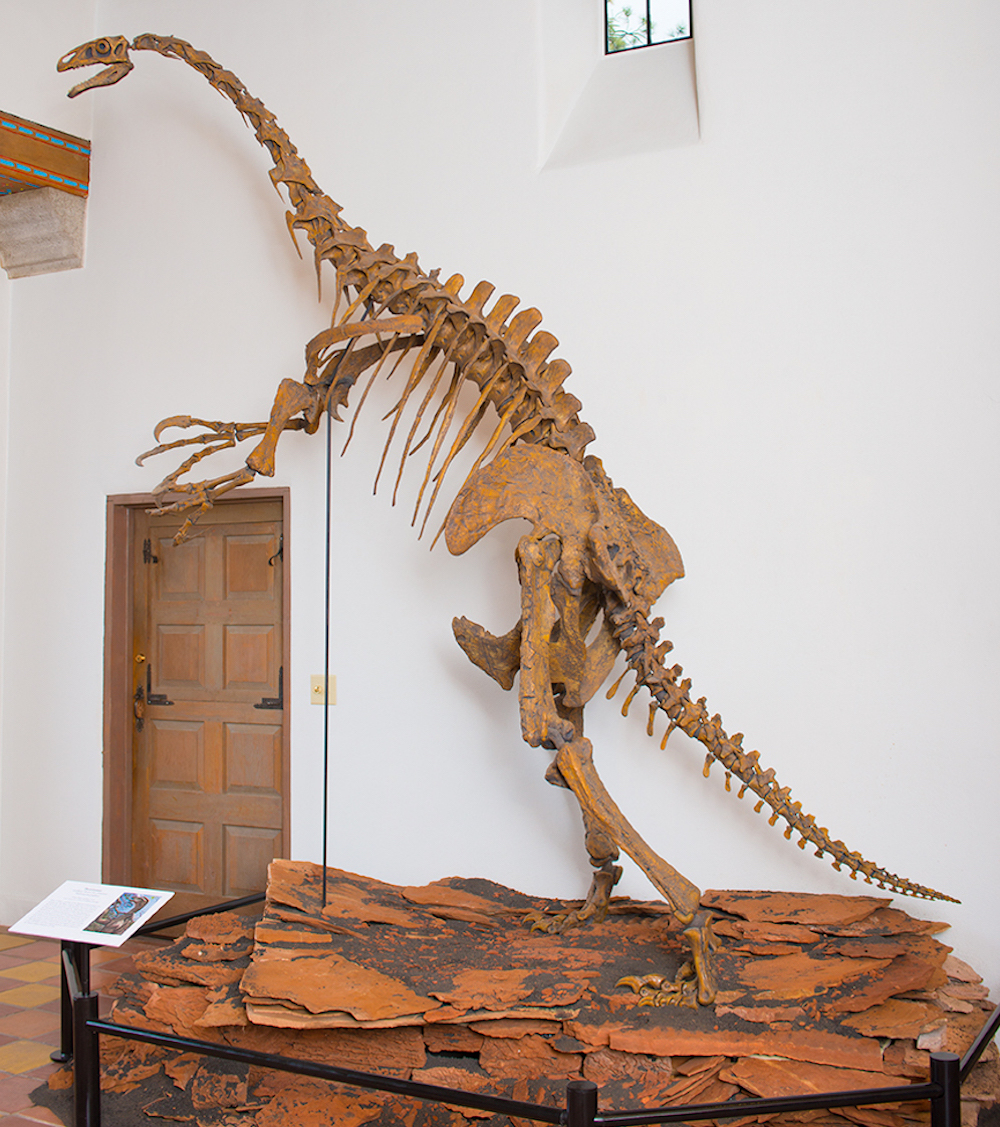 Despite the large claws, this dinosaur was a gentle giant, eating only plants, as evidenced by its small, flat teeth.

The discovery of a single toe bone led Museum of Northern Arizona paleontologists to uncover the most complete therizinosaur skeleton ever found.  The 93-million-year-old bones were excavated near Big Water, in the desert landscape of southern Utah. At the time the dinosaur died, the location was the bottom of the Cretaceous Western Interior Seaway, an ancient sea that covered the middle of North America. But this created a mystery. The dinosaur had lived on land, so how did it get buried in a seafloor, 60 miles from shore? And why were paleontologists able to find every bone except the skull?

The dinosaur’s identity was a mystery well into the excavation.

“We weren’t thinking ‘therizinosaur’ at first, because at that time they were known only from Asia,” said Dr. David D. Gillette, exhibit curator and MNA’s Colbert Chair of Vertebrate Paleontology at the time. “From that first toe bone, we thought maybe we had a big ‘raptor’ (an agile, hunting dinosaur). But when we found peculiar bones of the massive hips, we knew we had a sickle-claw dinosaur. They were like nothing we’d ever seen.”

Most dinosaurs in this mysterious family are known only from partial skeletons. And the lifestyle of these lumbering, pot-bellied, sickle-clawed forms has been debated for decades. MNA’s skeleton filled in some major gaps in what is known about therizinosaur anatomy and habits.

“In the past two decades, new studies have regrouped therizinosaurs with carnivorous (meat-eating) dinosaurs,” noted Gillette, “but there are many questions. Was this animal truly carnivorous as indicated by its shared ancestry with forms like Tyrannosaurus rex? How did it use its three slashing sickles on each hand? Did this small-headed predator actually prey on plants?”

It’s now thought that though the therizinosaur came from a carnivorous lineage, it was a plant eater and used the sickle-like claws to gather up quantities of vegetation. A modern comparison would be panda bears. Though pandas are part of the predatory bear family, they dine almost entirely on bamboo.

The therizinosaur was featured in an exhibit at MNA titled Therizinosaur: Mystery of the Sickle-Claw Dinosaur from 2007-2009. A cast of the skeleton is on display in the museum lobby and school groups enjoy watching the puppet show about the discovery of the dinosaur and how it might have died. Its technical name is Nothronychus graffami, for MNA volunteer Merle Graffam of Big Water, Utah, but museum staff call it “Claude,” because of the extremely long, curved claws.