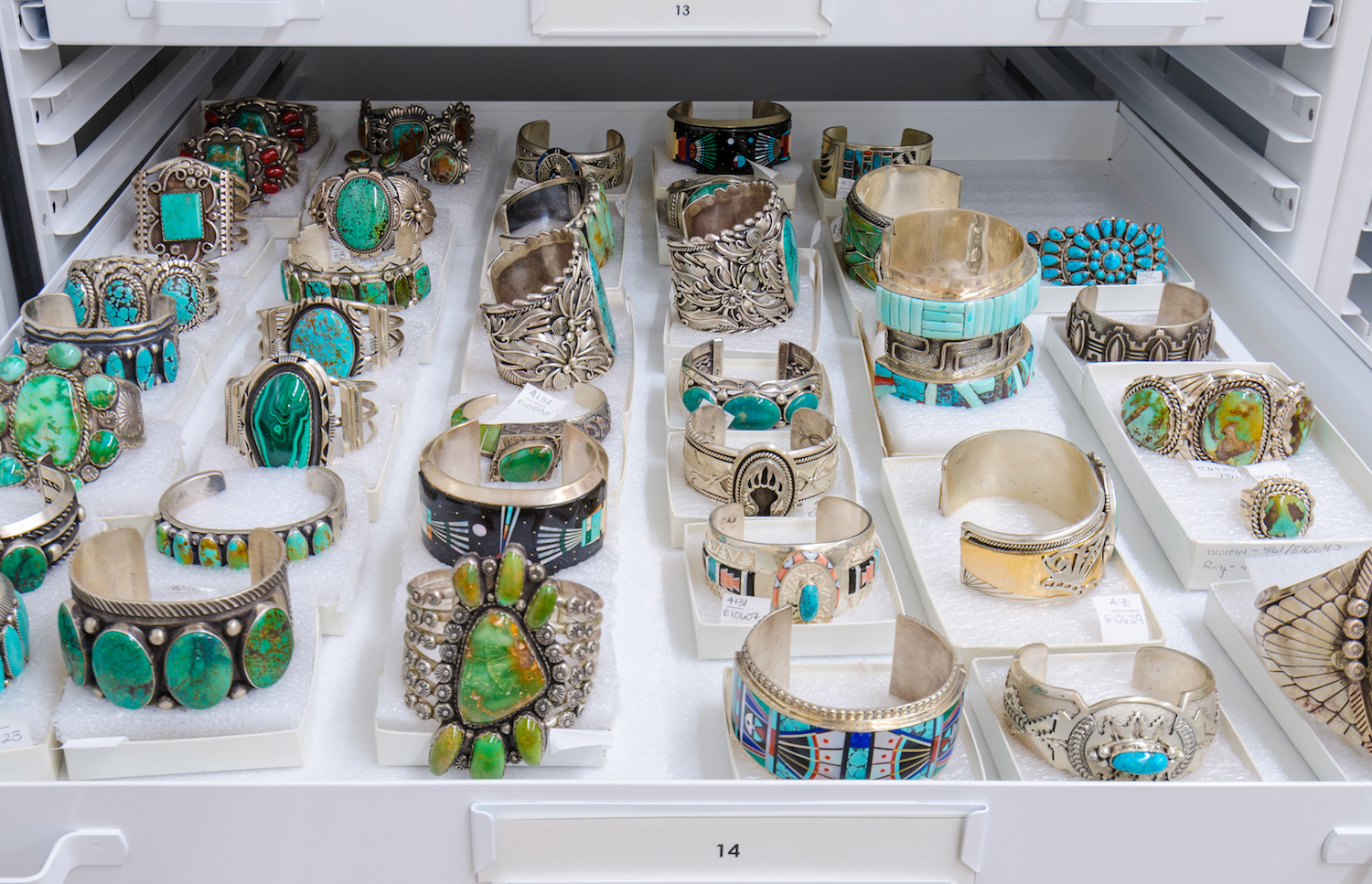 The extensive jewelry collection includes more than 1450 pieces of Navajo jewelry dating from the 1880s, including jewelry making tools and molds for sand casting. 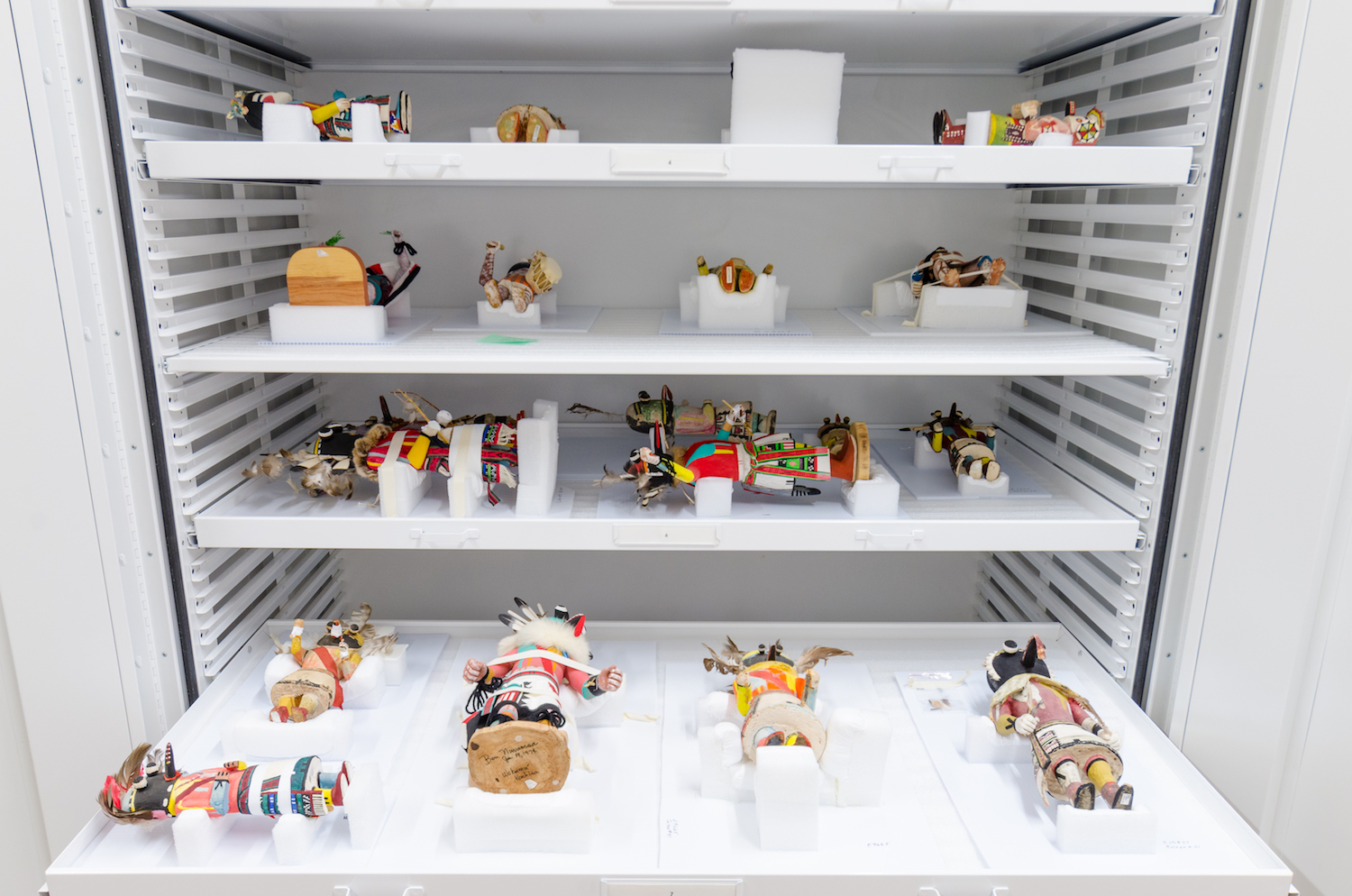 More than 1,000 katsina dolls and carved figures are kept in the Easton Collection Center, including 30 carved before 1900 and one that predates 1850. Over 120 are by Jimmy Kewanwytewa (Jimmy K.). 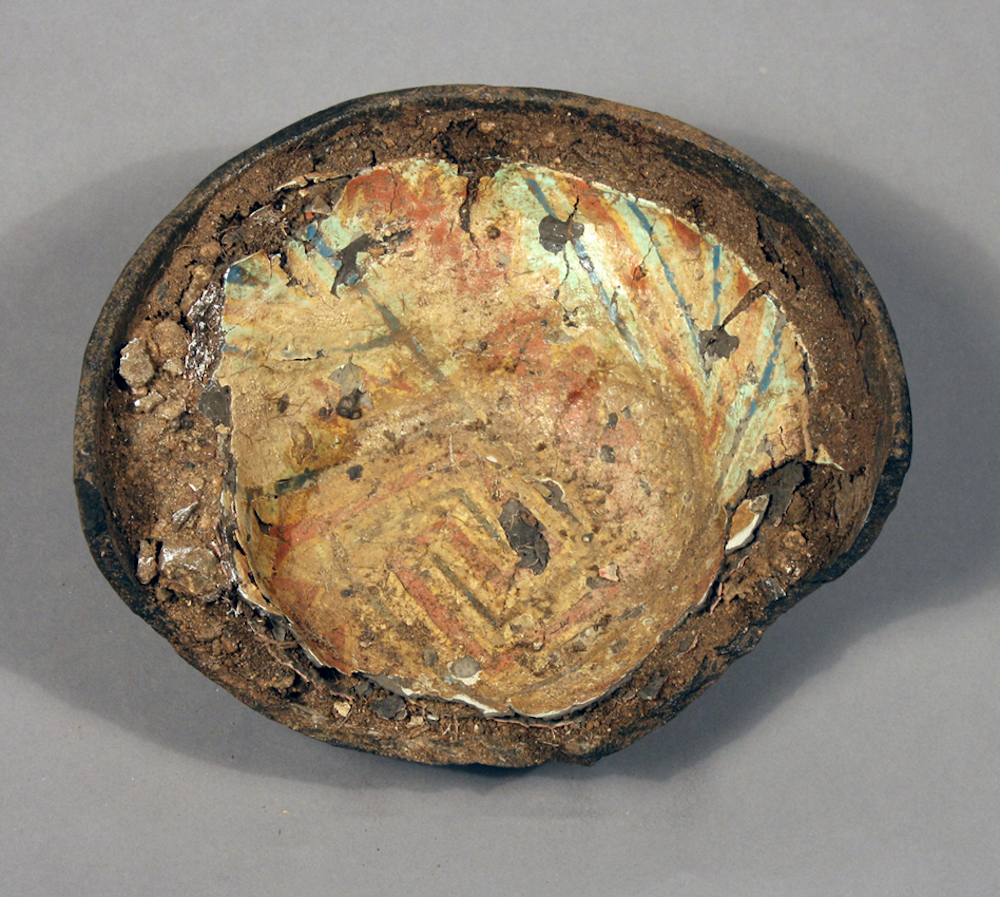 Painted basket inside of Sunset Red bowl, Sinagua, PIII A1596 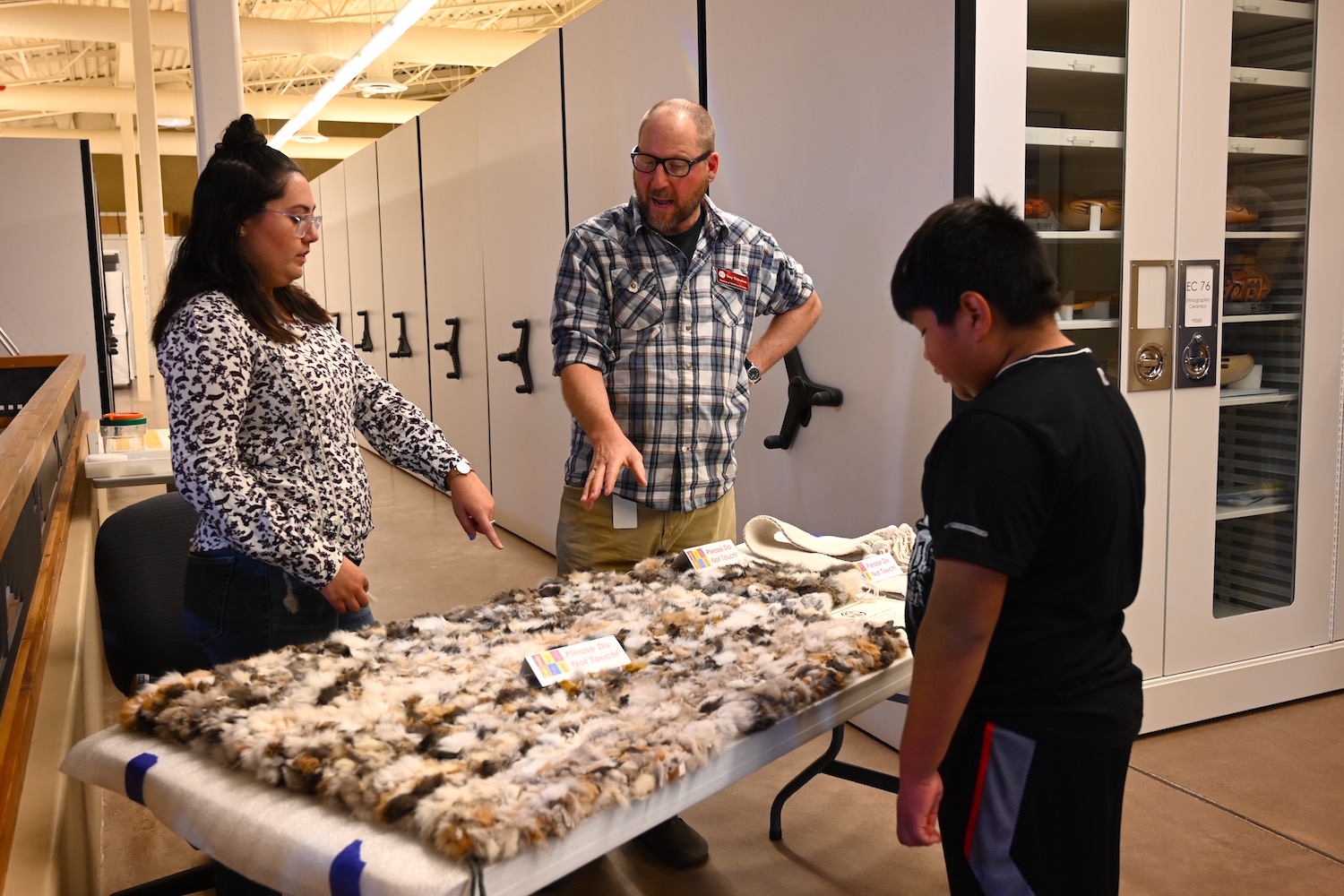 Rabbit-skin blanket shown during a tour of the Easton Collection Center. Zuni weavers Aric and Ian Chopito looked at older rabbit-skin blankets in the MNA collection before weaving this blanket, which won the MNA Spirit Award at the 2016 Zuni Heritage Festival. 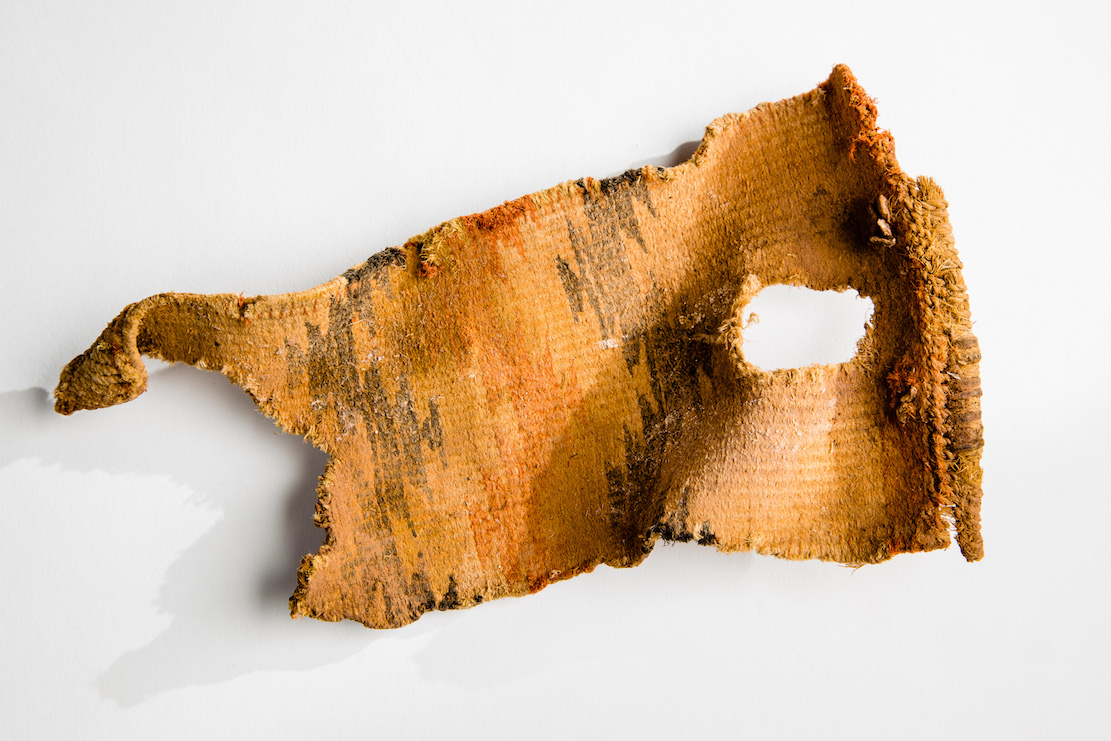 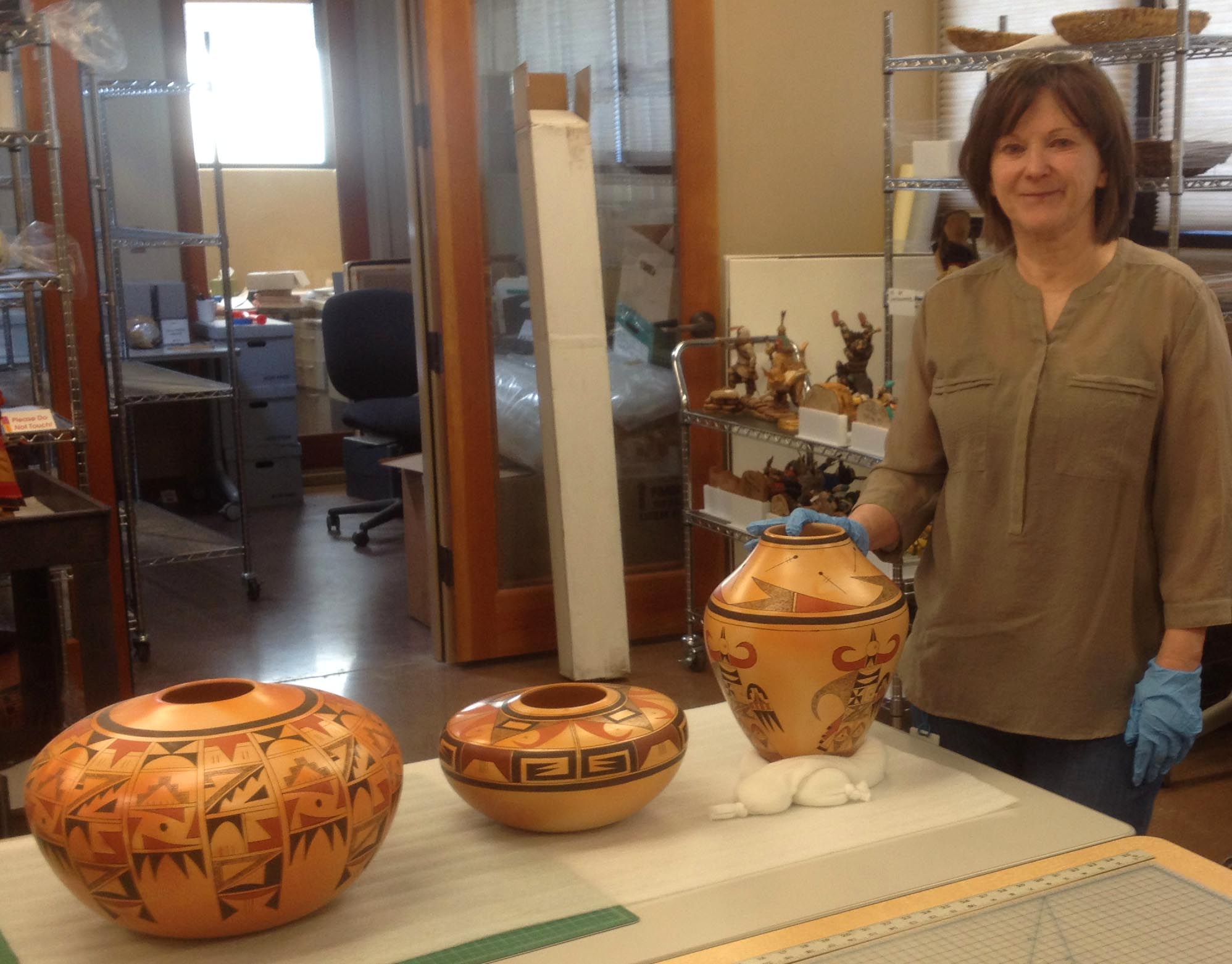 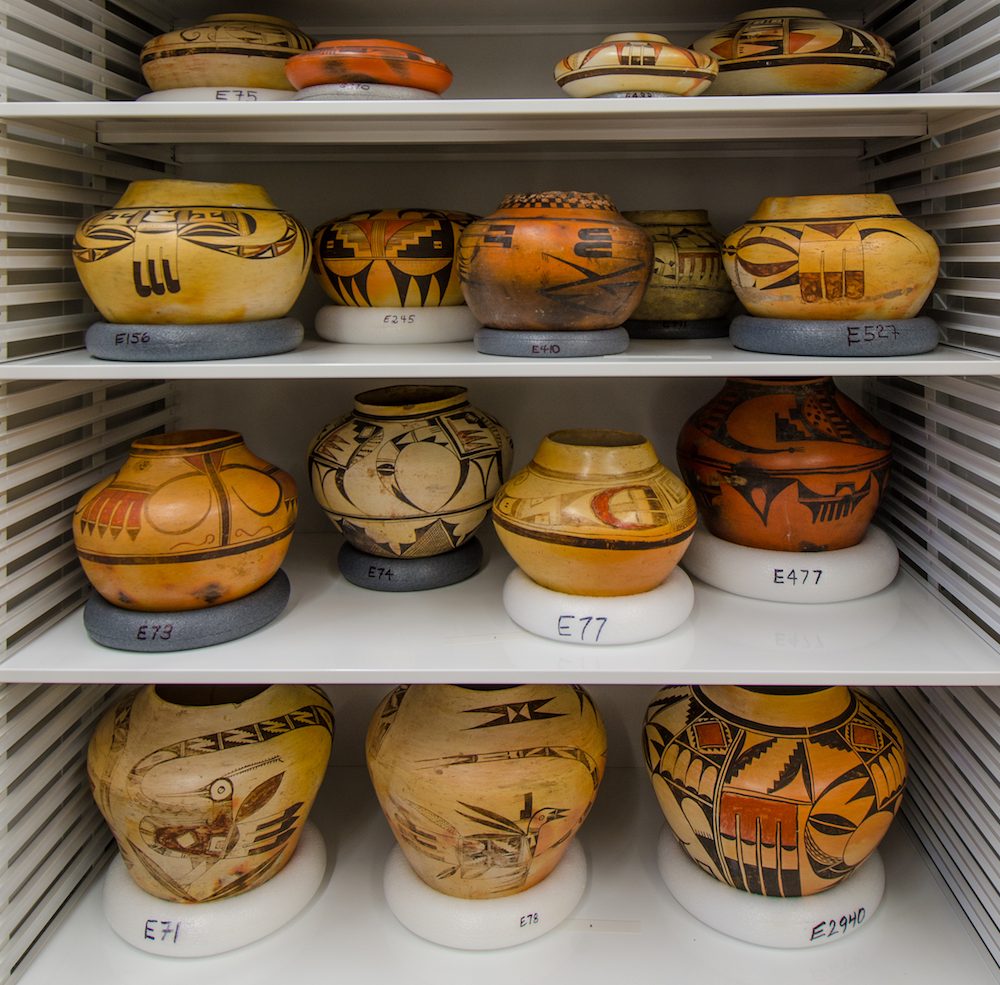 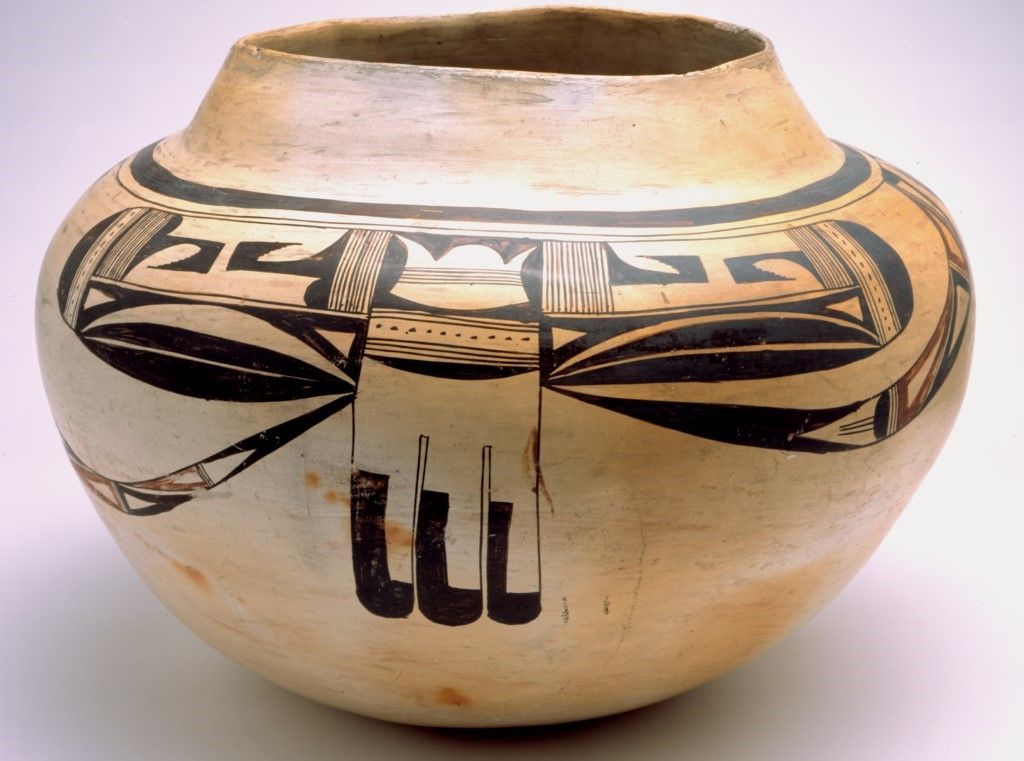 This pot made by the famous Hopi potter Nampeyo inspired the design of the MNA logo in the 1930s, when Harold Colton decided that MNA needed what was then called a “medallion.”

From spear points used by Paleo-American hunters to masks worn during the Covid-19 pandemic, the objects in the Anthropology Collection represent an unbroken continuum of human experience. However, within the collection records those objects are subdivided into Ethnology (historic) and Archaeology (prehistoric) holdings. This distinction is a remnant of the perspective held by scholars in the 1920s, when the museum collections were begun. Many portions of the anthropology collection also overlap with the art collection, as art is part of human culture and objects originally created for utilitarian purposes, such as pottery or textiles, developed into highly collectable art forms.

The archaeological portion of the collection includes stone and bone tools, woven sandals, original dry fresco mural paintings excavated at Awat’ovi and Kawayka’a, pieces of pottery, and thousands of other artifacts collected or excavated from more than 30,000 sites on the Colorado Plateau during a century of systematic field research. Professional and amateur archaeologist have used these objects to piece together the story of the people who lived in the area, including ancestral Puebloan, Mogollon, Sinagua, Cohonina, early Navajo, and Patayan.

In general, ethnology holdings were passed down from person to person until they were donated, commissioned, or purchased by the museum. Some of the ethnological items were purchased at the museum’s summer festivals, where artists continue to show and sell their work.

While some items are displayed within the museum, the majority of the objects, including those that are particularly fragile, difficult to display, or have cultural sensitivities, are cared for in the Easton Collection Center. They are made available to tribal artists, scholars, and culture leaders, and can be seen by the public during special tours. 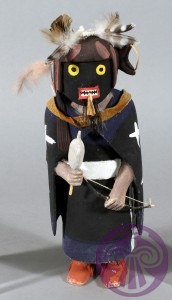 The collection of more than 1,400 katsina dolls and carved figures is considered one of the best in the world. The oldest katsina in the collection predates 1850 and about 30 were carved prior to 1850.  More than 120 were carved by Jimmy Kewanwytewa (Jimmy K.), who worked at the museum from 1934 until his death in 1966. He was the first carver to sign his work.

The number of older baskets in the collection is due to the dry climate of the southwest, which preserved baskets woven from yucca, willow, and other natural fibers that would be prone to decay. The collection includes sandals woven and worn 2,000 years ago, rare painted basket fragments, and several hundred Navajo, Paiute, and Apache baskets dating from the 1870s to the present. The collection of Hopi baskets is particularly complete, including wicker, coil, and plaited baskets, as well as the plants used to create the traditional vegetal dyes from early in the 20th century. 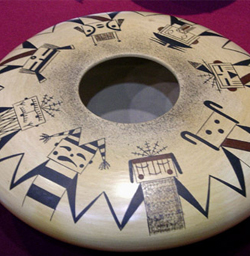 The Museum of Northern Arizona is well-known for its collection and work with prehistoric pottery. (Read more about the pottery type collection) The collection continues into the historic and modern eras, including Hopi, Navajo, Zuni, and Acoma. Among the notable artists represented are: Nampeyo, Polingaysi Qoawyma (Elizabeth White), Garnet Pavatea, Sadie Adams, Alice Cling, Louise Goodman, and Betty Manygoats.

The oldest objects left by the people living in the region are stone points used in hunting. The museum collection contains spear and arrow points, as well as bone scrapers, needles, awls and other tools.

At several times, the museum has researched and documented the weaving process, and the collection contains Navajo and Hopi weaving tools, wool samples, and dyes. The collection also contains Navajo jewelry making tools from the 1880s with molds for sand casting and tools used at the Hopi Craftsmen Guild as they developed the overlay technique, including a jewelry making tool kit used by Duwakuku. 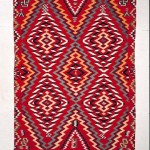 With more than 1,000 Navajo weavings, the museum collection is one of the largest and most important collections of Navajo textiles in the world.  The collection contains examples ranging in age from the late eighteenth/early nineteenth century to the present and is particularly strong in Late Classic and Transitional pieces from the late nineteenth century, early twentieth-century rugs, revival-style textiles, and contemporary weavings.

The Staples rug is a remarkable, oversized, two-faced Navajo weaving, from the Transition Period. It was woven between 1885 and 1890, making it the oldest surviving two-faced Navajo rug. It is also one of the largest rugs ever woven, measuring 18 feet 4 inches long by 12 feet 2 inches wide. Read about the History of the Staples Rug, which MNA now owns. 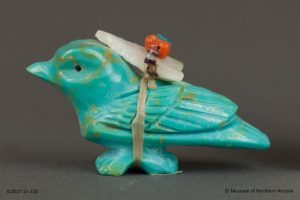 With drawers of dazzling silver and stone, the jewelry section shows off the artistry of Zuni, Navajo, and Hopi jewelers, as well as the developments of style and technique. The oldest jewelry items in the collection are made of stone, bone, and shell, often traded across great distance. Silverwork shows up much later, and the museum collection includes tools used by some of the early Navajo silversmiths in the 1880s, when they began combining silverwork with turquoise. One of the most stunning pieces of Navajo silverwork was created to adorn a horse. A saddle created by Ivan Kee and Ray de Berge is decorated with 19 lbs of silver and 1000 carats of Blue Gem Turquoise Zuni jewelers were particularly skilled at shaping and setting stones, and the Zuni jewelry in the collection incorporates intricate petit point and inlay work, including pieces by Leekya Deyuse, Zuni Dick, David Tsikewa and others.

The museum collection contains some of the earliest examples of Hopi overlay jewelry, which developed in the late 1930s through the 1940s. MNA founder Mary-Russell Ferrell Colton initially encouraged Hopi silversmiths to develop their own style and the collection includes original watercolor designs done in 1938 by the MNA () to suggest styles. The collection also holds tools and examples from the Hopi Craftsmen Guild, where the overlay technique was developed and taught, and some more than 450 pieces of jewelry, including many by Charles Loloma (1921–1991) who was known for his original and creative jewelry designs. (Read more Hopi Silver by Margaret Wright).