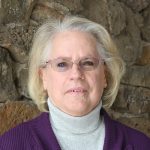 Born and raised in St. Louis, Missouri where she attended Washington University, obtaining a Bachelor’s degree in Psychology and a Masters in counseling. She worked as a counselor in the schools there until she met her husband, John, and moved overseas, living in England for seven years and Norway for two. While there, she concentrated on raising their two small children and offering family counseling services to the ex-pat community. When transferred to Houston, Cheryl went back to school to further her education and obtained her doctorate in 1998 from the University of Houston in Educational Psychology, where she taught statistics in the University of Houston system. Upon John’s retirement in 1999, the couple moved to Flagstaff. Cheryl taught at Coconino Community College for 10 years and both John and Cheryl went through docent training at MNA, finishing their training in 2001 and working as docents while also volunteering weekly on the research side of the street. This led to their work in helping to set up exhibits, assisting in the production of the Gala, and painting the galleries. Cheryl is also active in many other community organizations, joining the Board of Directors of the Flagstaff Symphony Orchestra in 2009, being its board president from 2012-2014, and just recently retiring as its executive director.