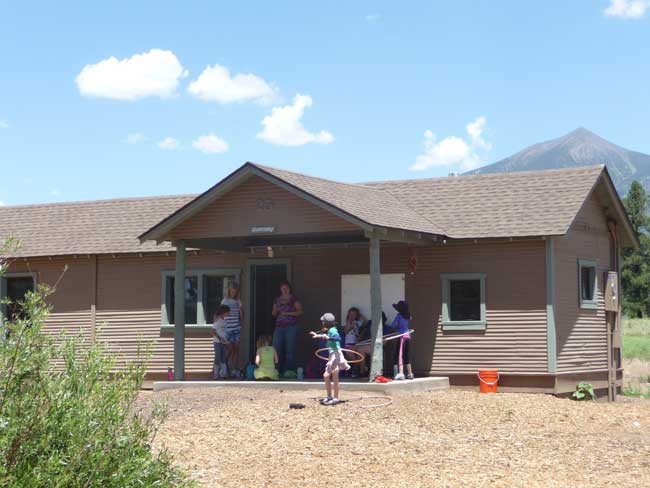 In 2010, three historic cabins on MNA’s campus, Matthews, Guernsey and Fewkes were relocated behind the Newberry Building on MNA’s Research Center campus. These buildings are currently used as classrooms for MNA’s summer Discovery programs for kids. 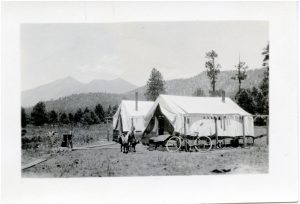 Formerly named Adini Kinlani (thunder city in Navajo), the two structures were the summer camp for the Coltons before their move to Flagstaff in 1926. Originally two separate frame buildings about 12 by 30 feet, they sat in a pasture east of the Historic Colton House. The structures were eventually joined with a two-story center section and used as housing. The building was later moved to MNA, where it was used as a seminar hall prior to the construction of Pearson Hall. 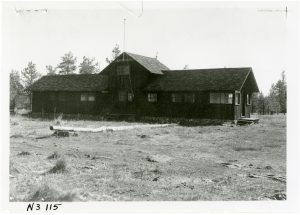 The building then served as a girl’s dorm named Parsons for anthropologist Elsie Clews Parsons. In 1966, when the geology building was built, Newberry was moved again to its present location and became a linguistic center for Indiana University, sponsored by Karl and Florence Voegelin, where it was known for a while as Indiana Hall. The current name was given to the building in 1967 for geologist John Strong Newberry who traveled with the Ives Expedition through northern Arizona in 1858. The structure was also a residence for visiting scholars.

The log cabin was built in the early 1950s for ethnologist Gladys Reichard and was named for archaeologist Washington Matthews. It has a kitchenette, bathroom and open classroom space.

Named for archaeologist Samuel Guernsey, the structure was built as part of the farm operations for Antelope Valley Ranch and dates from the 1930s. Willie Coin’s family lived here for many years. It has been used as MNA staff housing, a mailroom, and a storage space for the Publications Department. It was also used as the administrative office for the charter high school Flagstaff Arts and Leadership Academy from 1995-2010. 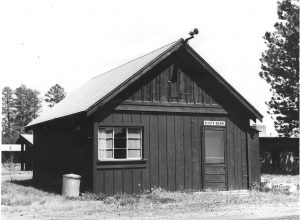 This one-room cabin may have been the original cookhouse at the Antelope Valley Ranch. It was furnished with camp equipment and used as housing by summer students and artist demonstrators in the 1940s. Named for Smithsonian archaeologist Jesse Walter Fewkes who excavated Elden Pueblo in Flagstaff during the 1920s, it was used as housing for artist demonstrators for many years during the summer. It was moved to its present location at Discovery Village in 2010.