MNA celebrates its past by looking to the future with an exhibition of cutting-edge art
Opens June 23
Exhibition remains open until Oct. 13, 2019 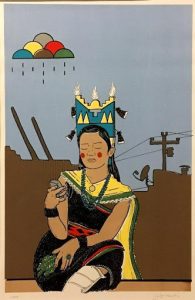 April 2019
[Flagstaff] Meet the new generation of artists representing the Colorado Plateau - a haute-couture fashion designer, a clay-artist working in a comic-book motif, a textile artist influenced by street-art, a mixed-media photographer and an abstract sculptor. Nine artists will be featured during the Museum of Northern Arizona’s annual Gala on June 22.

“I was interested in artists who are creating innovative work and would be exciting to watch over the next several years,” said MNA Fine Arts Curator Alan Petersen, who selected the nine artists. 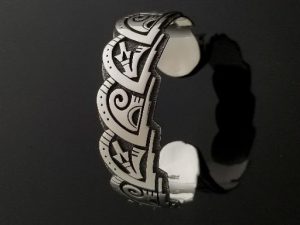 Some of the artists are pushing the boundaries of a traditional format, such as Hopi silversmith Delwyn Tawvaya. Tawvaya creates silver-overlay jewelry, a style the Hopi developed with encouragement from the Museum of Northern Arizona founders.

Many of the artists incorporate social and political messages in their art. Jason Garcia combines cultural references with a comic-book style to create edgy images conveying a commentary on colonialism. He often works in clay, but uses the traditional medium in new ways.

“Jason is pushing the clay to do more than is in its nature,” said Petersen. “With his choice of media, he’s creating an aesthetic confrontation that forces you to interact with the clay, and consider it in a manner that is entirely different than what you’re expecting.”

“I really support the way that Native artists are actively pushing back now against colonialism and repression,” said Petersen. 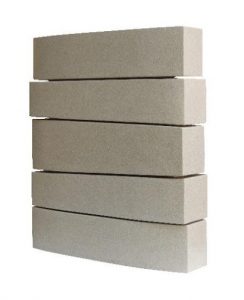 Nine 4 Ninety is the final exhibition in the year-long celebration of the museums 90th anniversary. Since its inception, MNA has been an important venue for the arts in Northern Arizona and the Four Corners region. Led by Mary-Russell Ferrell Colton as the first curator and following her initiative, the Museum has showcased the work of Native American and Euro-American artists, presented work by young artists, and advocated for arts education throughout its history. Nine 4 Ninety celebrates this history of visual arts programming and advocacy by looking to the future. The 13th annual Museum of Northern Arizona Gala Weekend & Fine Arts Auction will be June 22 and 23. It includes a gala dinner and auction on Saturday evening and Curator’s Brunch on Sunday. Individual and table tickets may be purchased at https://shopmusnaz.org/collections/special-events.
The exhibition will be up from June 23 to Oct. 13, 2019.

Fine Arts Curator Alan Petersen is available for interviews, as are many of the artists. Interviews may be by emailing khutchison@musnaz.org

About the Museum of Northern Arizona: More than 4 million people have visited the Museum of Northern Arizona since its founding in 1928. The mission of the Museum of Northern Arizona is to inspire a sense of love and responsibility for the beauty and diversity of the Colorado Plateau through collecting, studying, interpreting, and preserving the region’s natural and cultural heritage. MNA works in collaboration with native peoples of the Southwest to protect and foster the cultures, traditions, and beliefs of the Colorado Plateau by encouraging artistic expression and supporting, empowering, and educating visitors about the region's art and cultures. The Museum, located at 3101 N. Ft. Valley Rd. in Flagstaff, is accredited by the American Alliance of Museums.