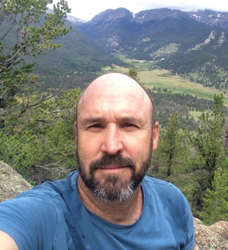 Dr. Kirk Anderson is a geoarchaeologist, applying his geological expertise to gain insights into archaeological investigations. He uses paleoclimate records, settlement patterns, and soil-stratigraphic techniques to interpret paleolandscape changes and past land use. Previous studies include how paleofloods affected early Puebloan farmers in the Grand Canyon; landscape changes and adaptation to the eruption of Sunset Crater volcano; alluvial and soil chronostratigraphic studies of Basketmaker III hamlets in southern Colorado; Archaic encampments and landscape change in sand dunes on the Navajo Reservation; and the dendrochonologic, paleoclimatic, and cultural implications of a juniper forest buried in the 16th century in New Mexico. He also uses geochemical, physical, and micromorphological techniques to understand sourcing and function of prehistoric mortars in Walnut Canyon National Monument and petroglyph disintegration at Wupatki National Monument. He also evaluated how ancient, large-scale tectonic forces influenced the weathering of petroglyphs at Wupatki. He consults with Native American tribes and the NPS to help decrease the severity of erosion of sensitive cultural sites at White Sands, Canyonlands, Natural Bridges, and Fort Bowie. He has authored and co-authored numerous publications and reports, and presents his results at national conferences. Dr. Anderson has a M.S. in Quaternary Studies from NAU, and a Ph.D. in Geological Sciences from UC-Riverside. For 30 years he has worked closely with private CRM companies, educational institutions, and government agencies on a variety of research topics. He has been with MNA since 2006.