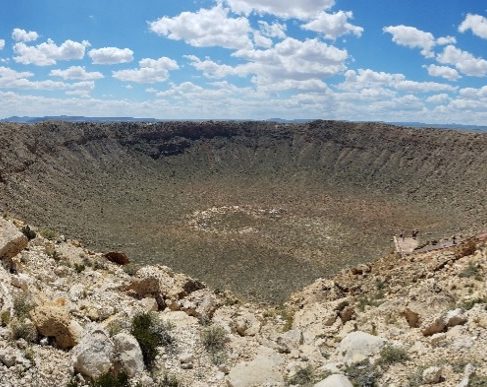 Amid northern Arizona’s geologic wonderland is a dramatic feature that draws planetary scientists, astronomers, and astrobiologists with the same sense of wonder and reference of a pilgrimage. Barringer Meteorite Crater, also known as Meteor Crater, is the world’s best preserved impact site and has been used as a training ground for planetary explorers, including NASA’s astronauts, for decades. The trip will be led by Dr. David A. Kring, who has been conducting research and leading training activities at the crater for about 30 years and is also one of the well-known discoverers of the Chicxulub impact crater in Mexico, which he and others linked to the extinction of dinosaurs 66 million years ago.

Participants will drive themselves to Meteor Crater. Please park in the lower lot “Mars” and meet at 9:00 am in the upper lot near the building entrance. Meteor Crater is located approximately 35 minutes east of Flagstaff, exit 233 off I-40 east