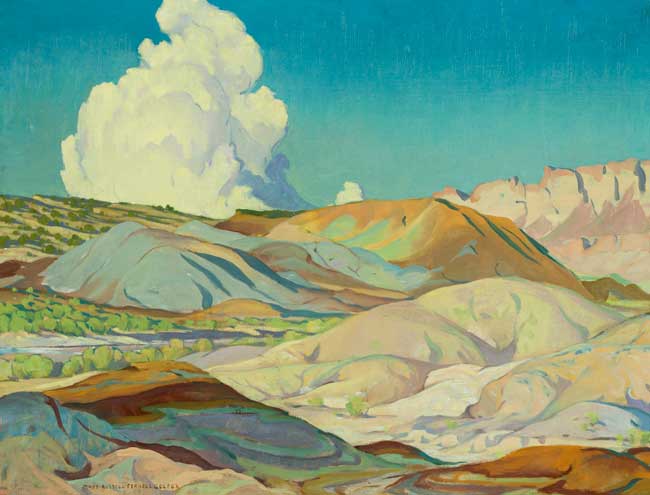 The Fine Arts Collection includes 1,900 works by important Native American and Anglo-American artists, many who lived and worked on the Colorado Plateau.

A strength of the Fine Arts Collection is its holdings of Native American works of art. The Native American artists represented in the collection are important for their individual achievements as well as their association, either as students or faculty, with the Santa Fe Indian School (now the Institute of American Indian Arts) and its influential studio art program. Many of the artists represented in the collection are notable alumni from the height of the School’s influence in the mid-twentieth century. They lived and worked on the Colorado Plateau, the geographical and cultural emphasis of the Museum’s collection, and played important roles in MNA’s annual Hopi and Navajo Festivals and other fine arts programs.

The Native American holdings consist of:

One of the most important bodies of work in the Fine Arts Collection is that of museum co-founder Mary-Russell Ferrell Colton. Mrs. Colton graduated from the Philadelphia School of Design for Women and exhibited with the Philadelphia Ten for thirty years. As a painter she was known for vibrant colors used in her landscapes of the Colorado Plateau and for her portraits of Native Americans. Cinder Hills (1939), the large diptych Walpi (1914) and Navajo Shepherdess (1918) are among the highlights of her work in the collection which includes:

Mrs. Colton was an important advocate for art education in schools. The Fine Arts Collections includes the two travel trunks which were sent to reservation and non-reservation schools in the 1930s through the 1950s.  Stocked by Mrs. Colton with art supplies, instruction books and examples, these trunks inspired the next generation of artists.

The Fine Arts Collection includes a small collection of 95 sculptures with a notable collection of plaster casts and bronze busts by Emory Kopta.

Although not part of the Fine Arts Collection per se, another valuable body of work in the Museum’s permanent collection includes 194 reproductions of murals that date to the period between 1300 and 1700 from the villages of Awatovi and Kawaika. These prehistoric murals were revealed and documented during excavations conducted by the Peabody Museum (Harvard) during the 1940s. In addition to these mural reproductions, MNA has five original mural fragments that represent one third of the total number (15) salvaged during the 1940s excavations. The murals and reproductions continue to serve as an important resource and inspiration for contemporary Hopi artists.