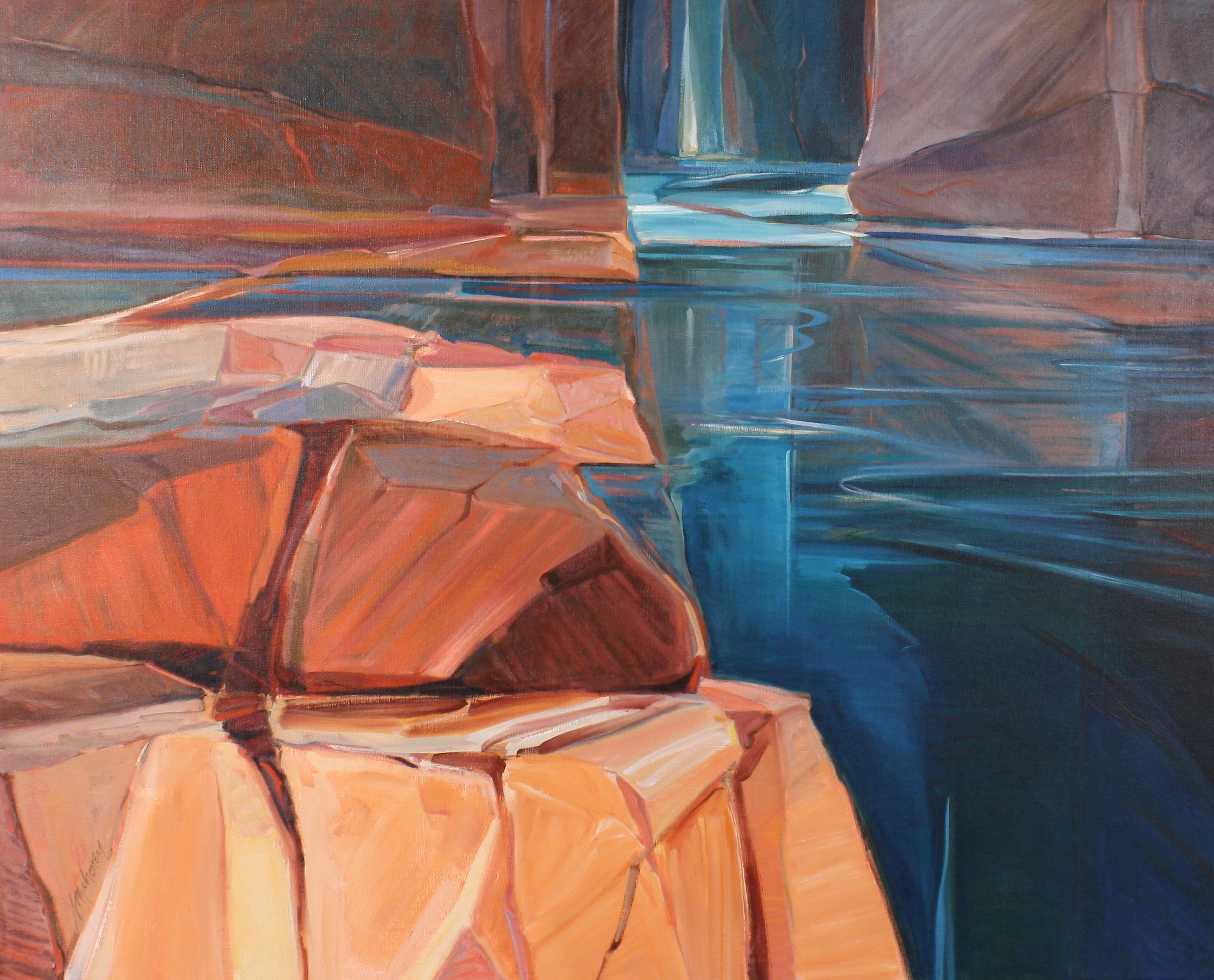 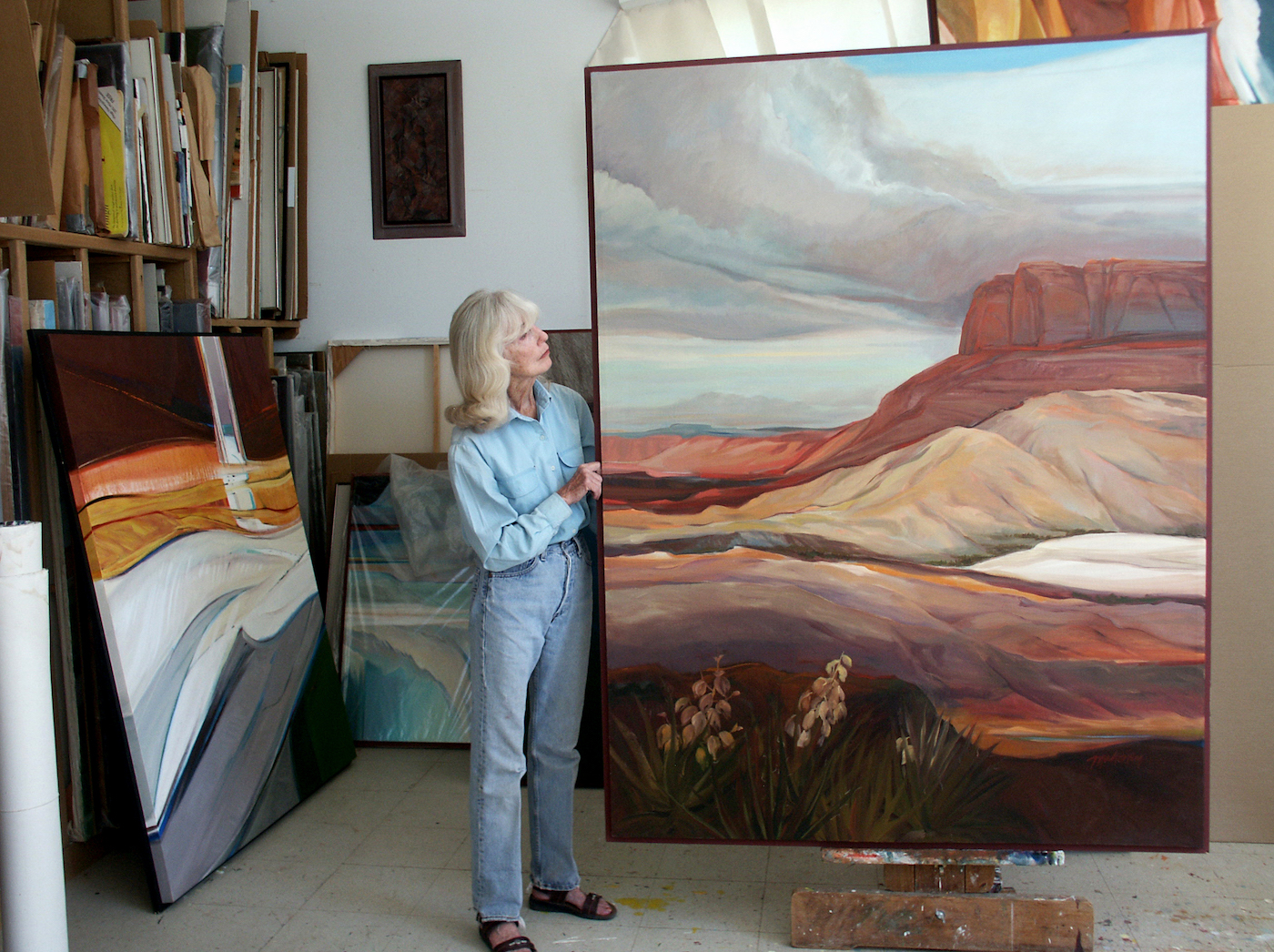 Joella Jean Mahoney in her studio with the painting Mystery Ridge 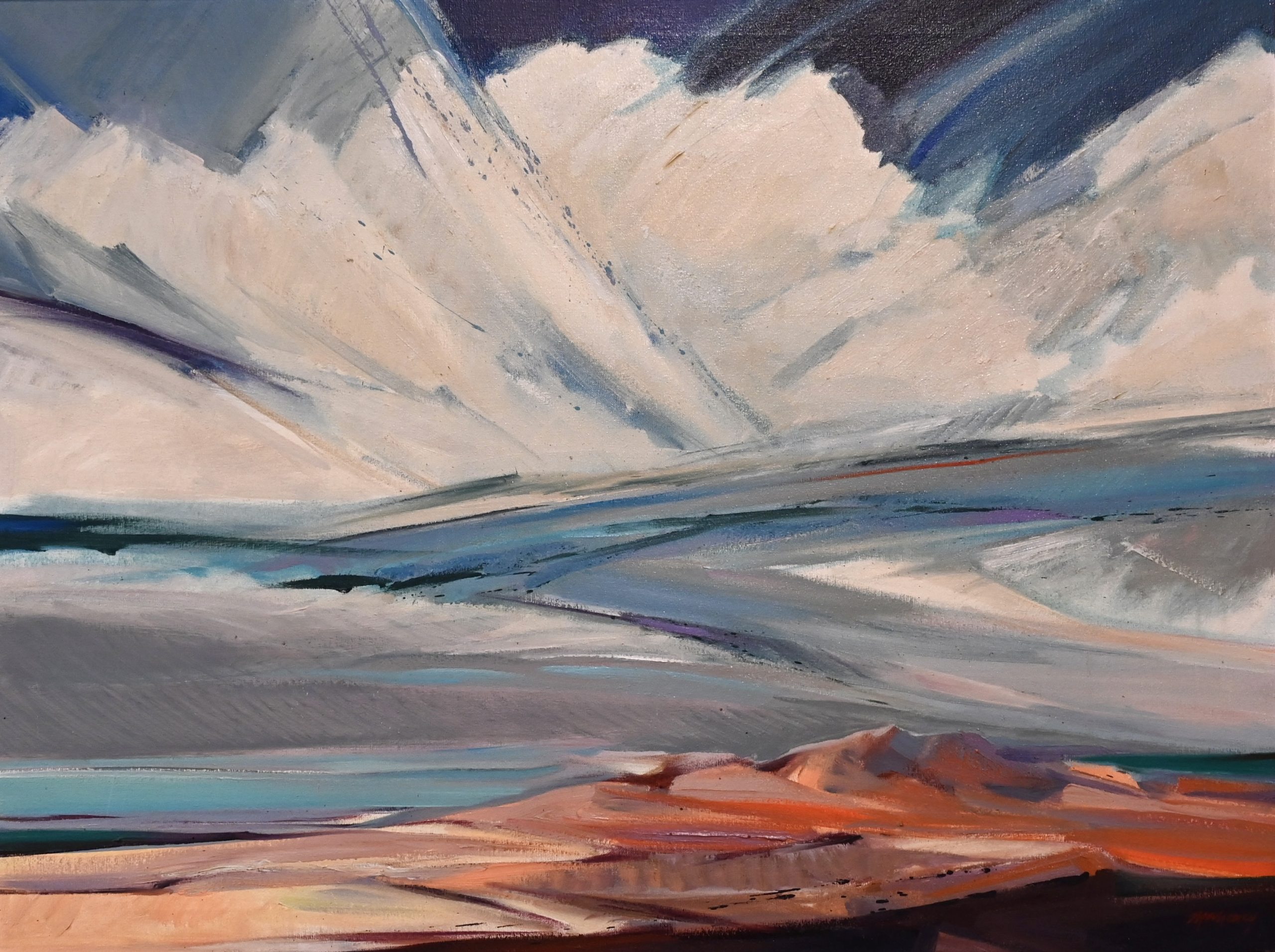 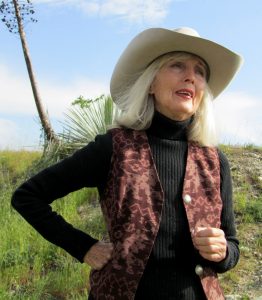 Arguably one of the most important female artists of the Southwest, Joella Jean Mahoney’s art career spanned 66 years, from her roots in the abstract expressionism of the 1950s to her role as a mentor and master artist with a distinctive style that bridges realism and abstraction. This exhibition presents key paintings by the artist, who left an indelible mark on the art of the United States that will continue inspire future generations.

Mahoney arrived in Flagstaff in 1951 as a young artist and highly motivated college freshman. Stepping off the train, she entered a new world that would have a profound effect on her life and art. She immediately felt the power of the northern Arizona landscape flow through her and knew that she had connected with a power beyond human understanding. In the sixty-six years that she spent painting the landscapes of the Southwest, Mahoney was able to convey the beauty and intensity of the region with her unique and eloquent style.

Mahoney’s paintings, with their roots in the power and energy of 1950s gestural abstraction, were a fresh and exciting new interpretation of the Southwest. Her paintings are rich in color and surface quality. Mahoney’s color was always vibrant but without the characteristic naturalism so prevalent in art about the region. Bold, intense passages blurring the distinctions between solid form and space dance with others, evoking the nuances of the desert world. Her surfaces and paint quality are seductive, drawing viewers into the inner world she shared. Whether quiet and intimate, like Secret Canyon (1984), or daring and explosive, like Rush to Meaning (1986), her paintings are intense and passionate.

One of her great abilities was Mahoney’s integration of ancient myth with her very modern aesthetic sense. In works such as The Source (1999) and Moon Mares (2002), the artist reflects on ancient stories and deities as vehicles for her own spiritual journey in an integrated and poetic manner. She developed the visual language to share her view of the mysteries of our world while avoiding well-worn tropes and clichés, making them accessible and pertinent for a modern audience.

Equally important as Mahoney’s role as an artist was her role as a teacher and mentor. She had a 30-year career as a professor at La Verne University where she transformed the art program from a small department into a strong visual arts program with areas of specialization, for which she was celebrated. Mahoney also brought feminist studies to ULV’s curriculum in the 1970s, at a time when higher education institutions and society in general were beginning to tackle sex discrimination, according to the university statement. She experienced discrimination herself and fought back.

During the summer breaks, she typically would teach workshops in a variety of locations around the country, sharing her passion for life and creative self-expression with thousands of students from all walks of life. She was a fervent feminist and throughout her long career and always sought to improve the standing and opportunities for women in the traditionally patriarchal art world.

As a participant in the United States State Department’s program “Art in the Embassies” Mahoney’s paintings traveled around the world where they were enjoyed by a large international audience. In 1996, during Northern Arizona University’s Centennial Year Celebration, the institution recognized Mahoney as a Distinguished Alumnae. The following year, Scripps College Fine Arts Foundation honored Mahoney for achievement in the arts. She was also the subject of several 50-year retrospective shows in Arizona, including at the Kolb Museum, South Rim, Grand Canyon National Park, the Museum of Northern Arizona, in Flagstaff and the West Valley Art Museum in Phoenix.

Whether, calm, and quiet like Canyon Reflections (c. 1985) or bold and majestic, as Mystery Ridge (1978), Joella Jean Mahoney’s paintings have the ability to draw viewers into state of being that is at once peaceful and reflective, while also energizing and profound. She found the elusive goal that so many artists strive for, and often miss; that is developing a truly unique style and vision that became her vehicle for an artistic journey like no other. Mahoney was highly respected by her patrons, peers and audience and her passing in June 2017, just four days before her 84th birthday, left a significant void in the art communities of the Southwest and northern Arizona in particular. She was an artist with enthusiastic and dedicated followers, and a role model for innumerable students and friends.

“She taught us how to look at ourselves through the landscape, and she expressed the human connection to place through her boundless canvases,” said Monica Lynn Mahoney in a statement after Joella died in 2017.

News story about this exhibition

Video of Joella Mahoney talking about her 2006 exhibition Passionate Vision